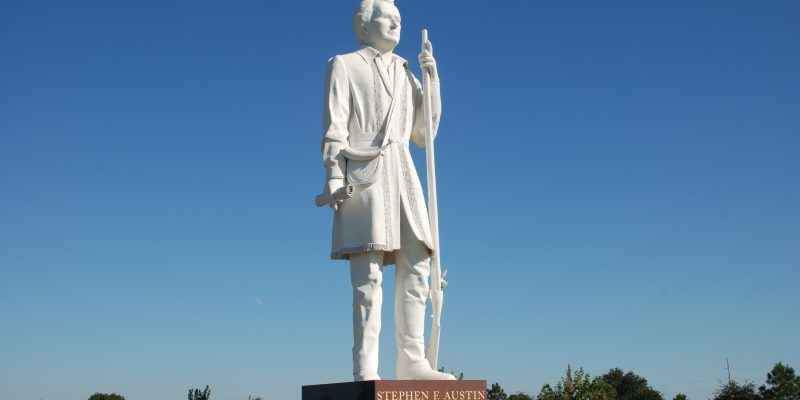 Lately in the Austin area it has been the liberal-progressive members of a City Council to oppose a monument or work of art depicting a slave-owner, no matter how heroic or famous.

In Cedar Park last night, and as an apparent turn of events, it was two of the more conservative members of the city council who voted against allowing a new sculpture of Stephen F. Austin, the namesake of Texas’s capital and revered as the Father of Texas.

The proposed modern-art sculpture came before the Council in regular business Thursday evening, meeting some questions by Council members and the Mayor regarding the approval process for works of art on public property. (This may be the crux of this developing story — we’ll have more.) Tim Kelly and Dorian Chavez voted against the measure to include the sculpture, apparently titled “Stephen F. Austin,” in a city-owned sculpture garden.

Kelly, who ousted a more moderate Republican incumbent, was in the cross-hairs of of a liberal Austin City Council member who crossed over the Austin city limits to campaign against Kelly, and donated to two of the liberal incumbents on the Cedar Park Council.

In neighboring Austin, city leaders included Austin and even the namesake of Travis County, William B. Travis, on a list of names of honorees deserving of removal. Local leaders were successful in re-naming several schools and local institutions. State leaders have also recently taken a meticulous look at certain historical displays at the Texas Capitol, and successfully removed a plaque questioning the intentions behind the Civil War. In 2017, statues to prominent heroes of the Southern Democrat establishment were removed from the University of Texas at Austin library mall — at least one of which did not have any connection to slavery or the Confederacy whatsoever.

Interested in more news from Texas? We've got you covered! See More Texas News
Previous Article ‘We are not backing down’: Trump pledges new way to count citizens, noncitizens
Next Article SADOW: Shreveport’s Liquor-Law Favoritism Is Overdue For Repeal