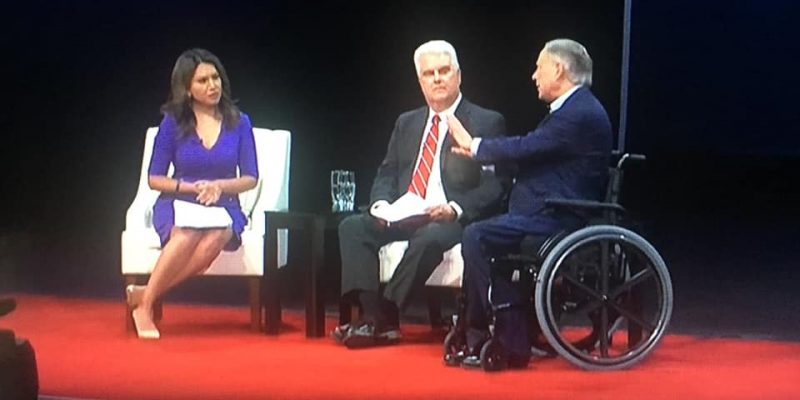 Prior to a meeting of a newly formed domestic terrorism task force set for Aug. 30, Gov. Greg Abbott hosted a town hall to hear from ordinary Texans, first.

“Even though I’m in Tyler tonight, my heart is in El Paso,” Abbott said, of the event’s location at the University of Texas at Tyler in East Texas which took place Thursday evening.

Watch the town hall here or see the YouTube link below.

In the wake of the mass shooting in El Paso at a Wal-Mart which left 22 dead and at least 20 injured, the big question of the evening was whether Abbott supports “red flag” laws as a means of preventing another such attack.

“Would a red flag law have worked to prevent the shooting in El Paso? The answer is no,” Abbott said. “… The El Paso shooter demonstrated no red flags at all that would’ve triggered any type of mechanism that would’ve prevented him from being able to get a gun in the first place.”

Democrats seized on the opportunity to pressure Abbott into calling a special session on gun violence. Congressman and former Texas House member Joaquin Castro gave a Democratic response in which he said Abbott’s response was not enough.

Abbott touched on several other questions posed that evening, including whether Congressional retirements would turn Texas blue (answer: no), if he believes Speaker Dennis Bonnen should step down after news of a recording meeting with Michael Quinn Sullivan in which favors were allegedly discussed (answer: let the Texas Rangers investigate), and whether President Donald Trump should tone-down his rhetoric (answer: voters respond more to results than tweets).

From the hip: In his responses, Abbott made mention of a series of roundtables to be held with legislators and other state leaders on the issue of mass violence. Previous roundtables held in the wake of the Santa Fe, Texas, mass shooting laid the groundwork for mental health reforms and funding in the recent legislative session. These roundtables will be where the rubber hits the road in terms of any legislative reforms. Pay attention to these as they occur.

Another big question of the evening was “why Tyler” for the town hall location — 734 miles down the road from El Paso? Abbott mentioned he was raised in nearby Longview, Texas. Tyler is also home to a Nexstar Media Group affiliate KETK-TV, which aired the debate on 14 stations across Texas. It’s a good a place as any and made for a friendly, more conservative crowd for the Governor to begin his listening tour on ideas to stop mass shootings.