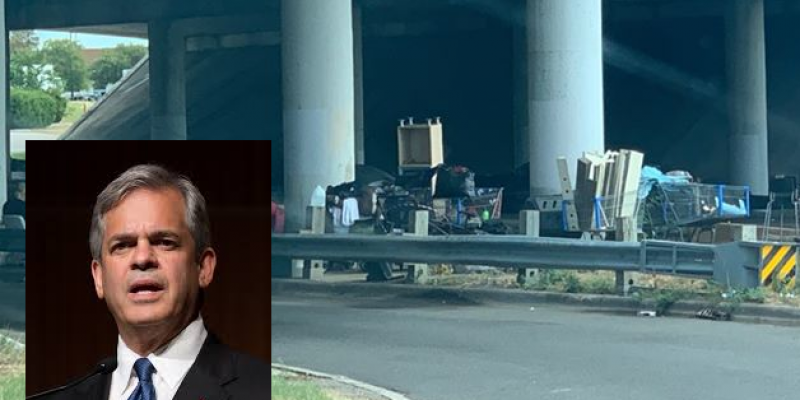 “The city is running out of strategies. I’m moving to Austin.”

This was the parting glance from the story accompanying a FOX News video essay on homelessness in San Francisco: a quote from a resident of the Bay City, identified as Anna Suarez, who is ready to pull up stakes and move to a city where the homeless population is kept away from public thoroughfares and safety is a priority.

But Suarez must not have been to Austin, lately.

Over the summer (and before Council and staff vacations) the Austin City Council and Mayor Steve Adler rolled out a camping ordinance that allowed the homeless to camp pretty much wherever they want — except for City Hall — so long as they don’t impede traffic. Associated with this move was a general rise in violence, clutter at public intersections and medians (a yard sale was taking place under a state-owned bridge on the city’s north side, as pictured), and all the cleanup efforts that requires.

Austin’s homelessness situation is beginning to quickly mirror San Francisco’s. As a matter of fact, the West Coast was where Mayor Adler recently went to gather ideas on how to handle the issue of homelessness in the city of Austin.

See our previous coverage here, in which we uncovered the city’s plan to exacerbate the homeless problem as a means to promote the case for additional public funding for a shelter in every city district.

Just this morning, Mayor Adler revealed just that, with a plan to clear certain public areas in exchange for funding of new shelters and housing. Austin-area blog portal the Travis Tracker has more, which we quote below:

“Over time, as more housing is provided, the restricted areas within such categories would be able to grow in number and size.

Vehicular traffic (Adjacent to roadways or medians, Adjacent to or on transit, bus or rail facilities)

We will note that parks and City Hall are already exempted from the city’s homeless camping ordinance, which has led to a massive proliferation of homeless camps across Austin.

From the hip: Suarez may find fewer homeless camps in Austin, but the structures in place to address homelessness are the same. Furthermore, Mayor Adler has taken a cue from West Coast liberal-run cities, so the strategy is and will continue to be the same unless a regime change is on the horizon. Given, Austin is portrayed as an alternative for Californians fleeing high taxes, inflated home values, and oppressive regulations (Californians are not alone). But if Austin doesn’t change course soon — and Texan voters cannot get a handle on fiscal responsibility in the Legislature — Texas may soon not be a place for Californians to run.

Interested in more news from Texas? We've got you covered! See More Texas News
Previous Article It Turns Out That The Democratic Socialists Of America Are Running Someone Statewide In Louisiana
Next Article Does John Bel Edwards Stand With LaToya Cantrell And The Squad?