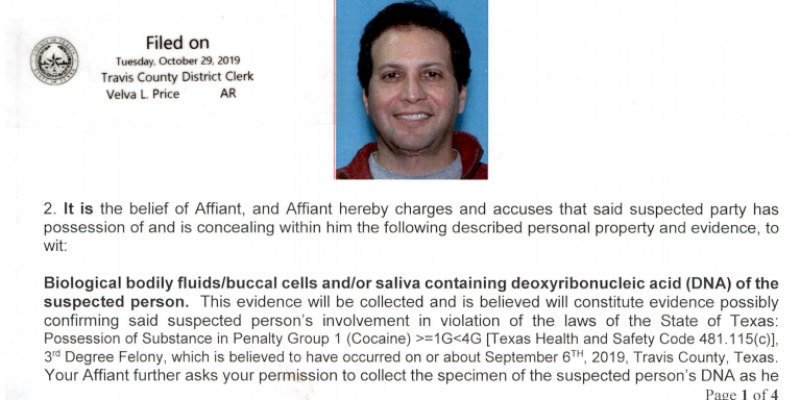 Rio Grande Valley Representative Poncho Nevarez, who decided to not seek another term to the Texas Legislature last week, now indicates that it was possible upcoming cocaine charges driving his decision to hang it up.

“Grief and addiction were consuming me,” Nevarez, chairman of three state House committees, told the Texas Tribune this morning. The interview came hours after a copy of what appeared to be a DPS warrant began circulating. He said he plans to seek treatment.

With Nevarez’s earlier resignation statement, he seemed to be blaming the political social media environment and cited a desire to “come home” (though, according to the affidavit, he has access to his law firm’s Cessna and is by no means in Austin most of the time) and “heal up for the rest of what may come in my life.” Nevarez deactivated his Facebook account around that time, to which he issued a rather atypical press release (pictured below): 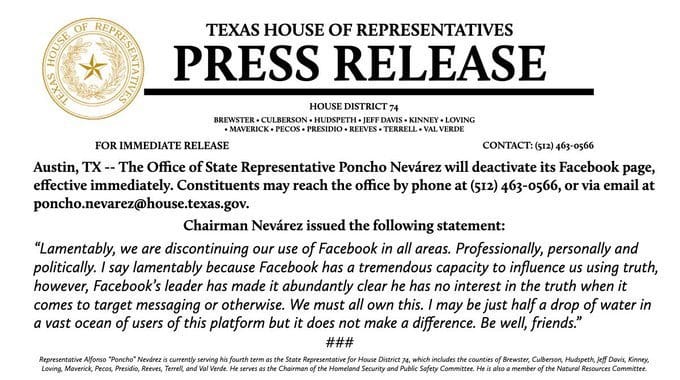 According to the affidavit, two TxDOT employees who oversee the state’s air transportation pool found an envelope with a state seal and Nevarez’ name and district on it on Sept. 6. DPS investigated and reviewed a security video which showed Nevarez entering a black SUV driven by a capitol staffer and dropping what seems to be the envelope.

DPS tested four clear plastic bags found inside the envelope. The white powdery contents inside was cocaine. A DNA sample was taken from Nevarez on Oct. 29.

Nevarez has developed a reputation for having heated disagreements with opponents at the Capitol. In the waning days of the 85th Legislature as a sanctuary cities ban bill was being discussed, Nevarez was accused by former Rep. Matt Rinaldi of threatening to attack him en route to Rinaldi’s vehicle. A fellow Democrat allegedly assaulted Rinaldi, leading to temporary DPS protection of Rinaldi. Other grassroots activists have complained of over-the-top verbal confrontations with the representative.

From the hip: Despite his aggressive reputation, and having opposed various pro-Second Amendment measures such as a bill to make churches safe for concealed carry holders, Nevarez became the Vice Chairman of the Mass Violence Prevention & Community Safety select committee. In House practice, that means should the party in control flip you’re the next in line to be chairman.

This is in addition to two other committees he chairs: Natural Resources and Homeland Security and Public Safety (he managed to hold on to this one, too).

Nevarez is a popular guy in the Texas Capitol and just to the right of your average Democrat on the House floor, making him a favorite of the Centrists who control the House. He’s also a skilled lawmaker. Last session he managed to tack on an entirely unrelated radioactive waste disposal amendment to a popular domestic violence Senate bill, which passed the House but was later vetoed by Gov. Greg Abbott.

You don’t earn those kinds of chairmanships or engage in that level of parliamentary shrewdness by being some shlub who happens to win the Democratic primary in the geographically largest state legislative seat in the country.

To say that talented lawmakers tend to struggle with addictions of all kinds — from drugs and alcohol to political power — is an understatement. It is a caricature of American political life. Nevarez is no different than many of his peers in that regard. We hope he gets the help he needs.