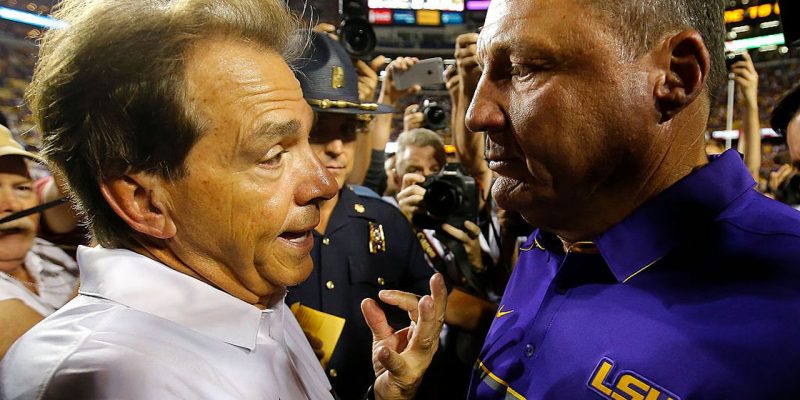 The LSU Tigers’ 2019 national championship reversed the curse of the 2011 season and title game debacle against Alabama.

There is something to celebrate in fans’ minds after the 2007 title. No longer does 2011 put that nasty taste in your mouth.

Still, despite the symmetry, there is another lingering shadow that was eliminated with the historic 2019 season.

Saban had established the standard of discipline and excellence in 2003 with a 13-1 championship season, the one blemish being a 19-7 home stinker to Florida.

It was certainly better than Les Miles’ 12-2 finish in 2007, when it needed a bevy of incredibly serendipitous circumstances to become the first two-loss national champion in college football.

Most every team in recent decades has stubbed its toe at least once. Even undefeated teams can point back to a down Saturday on the schedule when they had to fight and claw to barely eek out victory in the end.

But not this LSU machine.

The 15-0 record is the greatest in program and SEC history. Not since 1958 had LSU gone undefeated in a season (11-0), a team led by Billy Cannon, who was also the school’s only Heisman winner until Joe Burrow earned the award, shattering record after record in the history books.

It was truly a storybook season, one in which the Tigers beat an unprecedented seven top-10 teams.

But this emergence goes well, well beyond the numbers. This dominant season is about the psychological breakthrough of a program and a fanbase.

It is about healing a collective psyche and finally saying goodbye to a man so many Tiger fans love to hate, but somehow can’t stop talking about.

For although Saban was long gone by 2007, having left both LSU and the Miami Dolphins by then to coach Alabama, he was still given credit by many people for that championship. Who can forget the old argument, “Miles won with Saban’s players?”

It was a personal shadow for Miles he had prime opportunity to eliminate on January 9, 2012.

Instead, the shadow only darkened.

Ed Orgeron has become the new darling of this state, and he has done it with a completely different public demeanor than Saban. He is kinder, more agreeable, more personable. Yet he has still been able to balance that welcoming approach with a hard-core style of coaching his players that dwarfs the discipline and precision Saban’s teams displayed.

Really, think about it. When did you ever get the sense that the LSU team was out of sorts, out of control, confused in any way, for any number of consecutive plays in a game this past season?

How many undisciplined penalties did you as a fan have to agonize over?

I think we all know the answer. That was about as clean a run of games as you or any sports fan will ever witness.

And that starts at the top with O.

He demanded excellence from his coaches, from his players, from everyone involved in the process. The Tigers were more disciplined, more prepared, stronger, faster–just better–in every way, shape, and form than any of Saban’s five teams at LSU.

Have you heard just once that Orgeron was winning with Miles’ players, even though the 2016-19 coaching alignment is identical to the 2004-07 one?

Ed Orgeron never had to live in Miles’ shadow because he is a superior coach. He has overhauled what it means to be the perfect team. It no longer just means going undefeated in the win-loss column.

It means the hows and the whys as to how a team gets there.

It means the process.

At long last, Saban should be gone from Baton Rouge in full. Because as good a coach as he is, Ed Orgeron just got through doing his best Saban impersonation.

Except he did it even better.

Interested in more news from Louisiana? We've got you covered! See More Louisiana News
Previous Article State treasurer: Louisiana ‘on the verge of a crisis’ with local finances
Next Article Study: California Migrants May Be Making Texas MORE Conservative