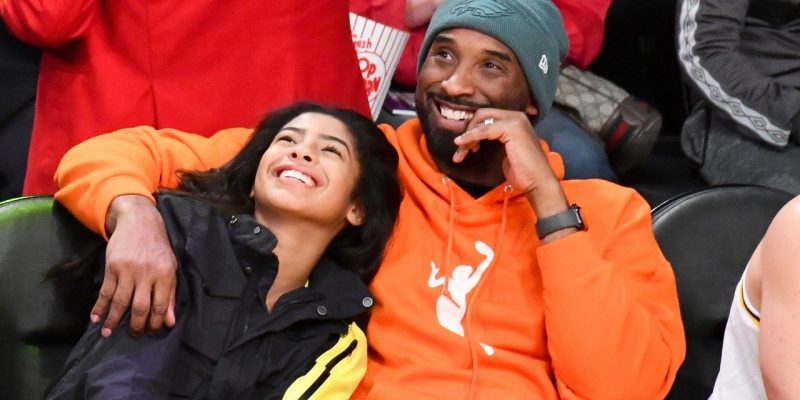 I was walking through the grocery store with my husband and our littlest Sunday afternoon, chatting about school lunches and trying to select one of those white breads with wheat and whole grain hidden under all that soft fluffiness where the kids won’t detect it, when a teenage girl passed us looking at her phone and mumbling about Kobe Bryant being dead.

We checked out with that beguiling bread and enough other goods to feed an army (aka, our family) and loaded little one into her seat before my husband checked his phone and said, “That girl was right.  Kobe Bryant and his 13 year old daughter died in a helicopter crash.  He was 41.”

My husband, a huge basketball fan—and a 40 something father to a teenager and two little girls—drove home pretty much in silence, while this overly empathetic mess of a mom and wife fought tears thinking of a young father dying alongside his teenage kid and of his wife and the other three children who will have to live without Kobe and Gianna for the rest of their days on this earth.

Perusing social media the past couple of days, I have mostly seen an outpouring of support, sympathy, prayers and positive thoughts . . . And then, because we as a society can’t have nice things, poisonous perpetual victimhood and all of the blaming, shaming, and destructive negativity that always accompanies such a mentality reared its ugly head.  Angry voices remind us loudly—sometimes in ALL CAPS—to forego human decency and the natural emotions and expressions of sadness and brotherly love and to instead celebrate the day the Black Mamba died.  Because—heaven forbid we not relish in this at the time of his death—17 years ago, when Bryant was 24 years old, he was accused of sexual assault.

Bryant was not convicted.  His accuser relented.  Bryant showed immense regret for what he put his wife through and for any emotional distress his accuser suffered as a result of the ordeal, of the encounter he maintained was consensual in his mind the whole way through.  He showed compassion, forgiveness, and empathy that is now being denied his memory and his family by this unsavory and mentally unhealthy element who would rather dance on a grave than admit not every accusation is true, not every man is a monster, and not every success story deserves contempt.

If you have hijacked the Bryants’ tragedy to highlight your own perpetual victim status, I have identified your toxic trait and am worried for you and for our society.  If you don’t see the red flag you are waving as a cry for help and get yourself to a professional for counseling, medication, or whatever would make you whole and healthy—and a positive and productive member of society—then you and those you may adversely impact, as well as myriad innocent bystanders, stand to be further polluted by the venom you heedlessly voice.

Screaming (i.e., posting) a tirade about standing firm in your anger and disgust toward Kobe Bryant in the wake of his death for having been accused of sexual assault nearly two decades ago puts you in the same category as the Westboro Baptist Church confused crusaders who wave their incendiary “God Hates Your Feelings” signs at the most inappropriate times and places.  It’s gross, and it’s tacky, and it fuels a gratuitous fire that aims to eviscerate common decency and ultimately fails to contribute anything of value to a society suffering post traumatic stress disorder.

And speaking of post traumatic stress disorder (and the assorted array of traumatic events and damaged people who cause it) . . .  How do you know the person you snuggle up with at night, extol the virtues of to your friends and family—and choose to raise your children with—was not at one time someone elses’s living nightmare?  If your main squeeze never achieved Kobe Bryant’s level of fame, fortune, and success in the public eye, you can consider both of you blessed to not have your worst moments scrutinized in the media and open to the court of public opinion.  If the love of your life is an average Joe, chances are you won’t have your grief at his eventual passing compounded by the public rants of bitter women around the world who hate him for the alleged missteps of his youth.  How nice for you and yours, eh?

How do we decide who is worthy of forgiveness and capable of rehabilitation and redemption, anyway?  If we all get on board with throwing people away for even being accused of wrongdoing, we’re lost.

Many people would say there is no greater sin than a mother killing her own child.  Does that mean a woman who has had an abortion should be cast out with a scarlet letter and no sympathy, support, or future as a member of her community and our world?  Of course not.

Should anyone ever accused of driving while intoxicated be branded a would-be killer and forsaken in permanent perdition?  If the person is in fact guilty, then he could have potentially done irreparable harm.  Think about everyone you know who may ever had a couple of drinks, or a medication that causes drowsiness, or a dose of medical marijuana, and gotten behind the wheel.  You ready to throw that baby out with the bathwater?  If doing so would give you pause, then don’t pile on to the Bryants’ inconceivable pain—or take away from Kobe’s accomplishments personal and professional—with your injudicious acrimony.

I am far from unsympathetic to people who are triggered by reports of sexual assault.  I am, however, sorely disappointed in and frankly frightened by those who, in the year 2020, still think Abigail Williams was the victim in “The Crucible.”  My sisters, you are in desperate need of healing, and you are doing our brothers a grave injustice.  Whoever hurt you, the burden and responsibility of getting the help you need is on you.  I for one am rooting for your recovery.

Interested in more national news? We've got you covered! See More National News
Previous Article RESPECT: Seven Years Later, This Writer is Coming Through on a Promise to Tyrann Mathieu, Part III
Next Article State treasurer: Louisiana ‘on the verge of a crisis’ with local finances