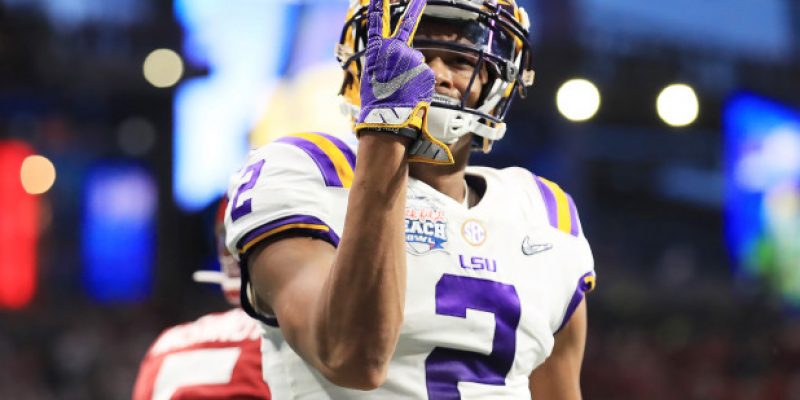 A midseason All-American selection at wide receiver, Justin Jefferson fell off the radar a bit in the second half of the season, only because his teammate Ja’Marr Chase was busy doing astronomical things on his way to winning the Biletnikoff Award.

But it doesn’t mean Jefferson was any less of of a star in 2019. He pulled in a school-record 111 receptions for 1,540 yards and 18 touchdowns over 15 games, helping the Tigers win the College Football Playoff National Championship with a perfect 15-0 record.

The postseason All-American voters were not going to place two receivers from LSU on the first team, but I’ll say it again as I’ve said it before: Justin Jefferson was an All-American last year. It was a shame that he didn’t bring any individual hardware home to show it.

But after his recent performance at the NFL Scouting Combine, it is likely that none of that will matter much anymore.

Those numbers, cumulatively, placed him in the 81.8 percentile for NFL wide receivers, according to 3sigmaathlete.com.

Justin Jefferson was a pro playing among amateurs in 2019. Now he is poised to make some NFL team very explosive indeed.

ESPN analyst Kirk Herbstreit, earlier in the season, said on national television, “This Justin Jefferson is a big, time, receiver at LSU.”

Herbstreit took to Twitter after the Combine to echo that sentiment:

Deep and talented group of WR’s in this years draft…teams need to be VERY careful with this guy. Be tough for me to pass on him if I needed a playmaker. Kid has IT. Straw that mixes the drink kind of guy. Plays with an energy and confidence that can impact the entire offense! https://twitter.com/JJettas2/status/1234603302593204229 …

A former three-star recruit, Jefferson was ranked as the No. 308 wide receiver in the country and No. 76 overall prospect in Louisiana for the 2017 class, according to 247Sports.

“Justin Jefferson’s on-field play in 2019 speaks for itself, but his 4.43 second 40 time exceeded expectations and could put him firmly in the mix as a potential first-rounder,” wrote Charles Power of 247Sports. “Jefferson has seen his body and game transform in his time in Baton Rouge. While many of these top performers were elite athletes at the high school level, Jefferson was more of a late bloomer, with a verified 4.88 40 coming out of high school.”

How many of those 307 receivers ranked ahead of him in 2017 will never step foot on an NFL field can surely be answered, but it doesn’t matter and I certainly don’t have the time. The simple fact is that Justin Jefferson may have just risen above them all into a first round pay day.