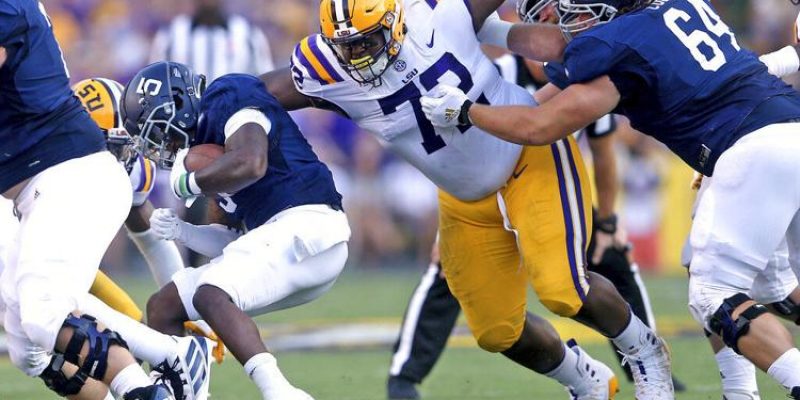 The LSU defense under departed defensive coordinator Dave Aranda was good, very good, for four years. It showcased linebackers’ ability to move sideline to sideline and make plays in the open field. It was also along the lines of a bend-but-don’t-break approach to playing that side of the ball.

Players like Patrick Queen and Devin White, both NFL first rounders, thrived in his system.

What was not highlighted, as it had been before the years under Aranda, was the ability of the front down-lineman to have that same freedom.

Players like Glenn Dorsey, Barkevious Mingo, Tyson Jackson, Kyle Williams, Bennie Logan, and Michael Brockers—a much longer list than you’ll find at linebacker—may not have succeeded to the degree they did in the 4-3 system of old, had they played from 2016 to 2019.

This is the central difference between the 3-4 base defense Aranda ran and the 4-3 new defensive coordinator Bo Pelini is bringing back to Tiger Stadium. Pelini was LSU’s defensive coordinator during a dominant run from 2005 to 2007, in which Tiger fans witnessed some of the most violent football they’d ever witnessed.

Former Tiger and national champion Rashard Lawrence, picked by the Arizona Cardinals in the fourth round of this year’s NFL Draft, gave a nod of respect to the old guard while seeming to look forward to watching the new next year in Baton Rouge.

That 2011 defense, of course, was out done only by Alabama’s in the national championship game. The Tiger defense that year was loaded with top-shelf NFL talent.

Former @LSUfootball defensive lineman @Rashard_99 breaks down the difference between the two approaches and what Tiger fans should expect in 2020.

"Kind of reminds me of the 2011 team." pic.twitter.com/ArG1gDsfLz

Who could forget even before 2011, during Pelini’s first stint with the Tigers, besides the aforementioned Dorsey and Jackson’s havoc in the backfield, LaRon Landry and Chad Jones flying in from the safety position to blow up opposing quarterbacks?

In each of his three seasons in Baton Rouge, Pelini’s defenses ranked No. 3 in the nation in yards allowed. LSU also ranked No. 3 nationally in scoring defense in 2005, and No. 4 in 2006. The Tigers trounced Miami and Notre Dame in consecutive bowl games his first two seasons, then did the same to Ohio State in winning the national title in 2007.

Those Tiger defenses always seemed to play with bad intentions. Like they wanted to seriously hurt the little boy in front of them. And his grandmother if she were there.

This hasn’t been the case the last four years, although part of that lies in the fact that rules to protect offensive players have increased dramatically over the years. The team has lacked a certain violence that Pelini’s demeanor and system is sure to bring back.

LSU’s defense was indeed solid, displaying dominance at times under Aranda. But his more cerebral approach is now giving way to a more player-friendly, aggressive scheme that will turn the dogs loose much more. In a word, the LSU D will, once again, be ferocious.

Interested in more news from Louisiana? We've got you covered! See More Louisiana News
Previous Article Here’s Why We Weren’t On Board With That Emergency Elections Plan
Next Article Texas City Brands ‘Wuhan Flu,’ ‘Chinese Virus’ As Hate Speech