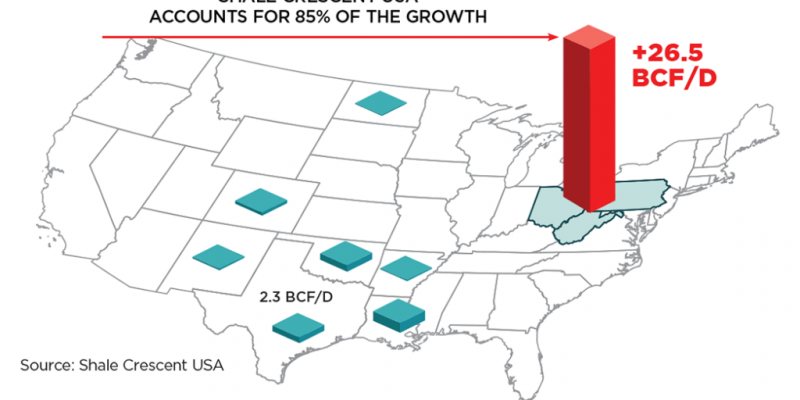 Since 2007, there has been a regional shift in liquefied natural gas (LNG) production in Ohio, West Virginia and Pennsylvania because of technological advances in drilling and delivery.

According to an analysis by the publicly held company IHS Markit, these three states combined produce more natural gas than Texas.

From 2008 to 2018, 85 percent of all natural gas growth in the U.S. has come from these three states because of the development of the Marcellus and Utica Shale formations.

If Ohio, West Virginia and Pennsylvania were a country, they would be the world’s third-largest natural gas producer, behind only the U.S. and Russia, Greg Kozera at Shale Crescent USA, an economic development initiative, says.

Kozera maintains that the most profitable region to build a petrochemical plant is in the Shale Crescent region because it is one of the few global locations where the natural gas is located in the same area as the manufacturing plants and end-use consumers.

Using Cryobox liquefaction units, and after set-up and safety checks, production began within hours, with no need for pipeline infrastructure, Edge LNG said. Selling and delivering LNG to customers in the northeast region is made possible through its truck-based virtual pipeline.

Mark Casaday, CEO at Edge LNG, said the project was a way to monetize wells that would otherwise remain dormant and grow the domestic LNG market in the U.S.

The region went from producing 3 percent the U.S. natural gas supply to 30 percent in seven years because of new horizontal drilling technology. Horizontal lateral lengths have gone from 3,000 feet in 2010 to more than three miles 10 years later, Kozera said.

According to a recent IHS Markit report, investing in petrochemical development in the Shale Crescent Region has several advantages over investing in a comparatively similar venture in the Gulf Coast region.

HIS Markit projects that the region is expected to produce $713 million more in net present value over the life of a project compared to a similar project in the Gulf Coast region. Over a 20-year period, Shale Crescent USA says this could equate to a pre-tax profit advantage of roughly $3.6 billion.

The IHS Markit report is based on a review of 10,000 simulated analyses comparing new investment in an ethylene project in the shale crescent region compared to the U.S. Gulf Coast.

According to the executive summary, “The IHS Markit analysis predicts that an ethylene project in the Shale Crescent USA region will produce a net present value of $930 million over the life of the project, compared to a NPV of $217 million for a similar project on the U.S. Gulf Coast.”

“The Shale Crescent USA region is in close proximity to over two-thirds of U.S. polyethylene consumption,” the executive summary of the study states.

According to a recent U.S. Energy Information Administration (EIA) Natural Gas Liquids Primer update, surging production of natural gas in the Appalachian Basin is expected to quadruple total eastern U.S. production from 2013 levels by 2050, and NGL production is expected to increase by more than 700 percent by 2023.

EIA reports that total U.S. consumption of natural gas rose by 3.1 percent compared to the previous report week, according to data from IHS Markit. Natural gas consumed for power generation climbed by 8.7 percent week over week and exports to Mexico increased 8.2 percent as its economy began to open up after coronavirus shutdowns.

In the residential and commercial sectors, consumption declined by 6.4 percent and industrial sector consumption decreased by 1.2 percent week over week, according to EIA.

Interested in more news from Texas? We've got you covered! See More Texas News
Previous Article Does the Supreme Court Decision on LGBT Workers Cross the Line?
Next Article Reports: Borrowing from Fed has long-term economic consequences for failing states