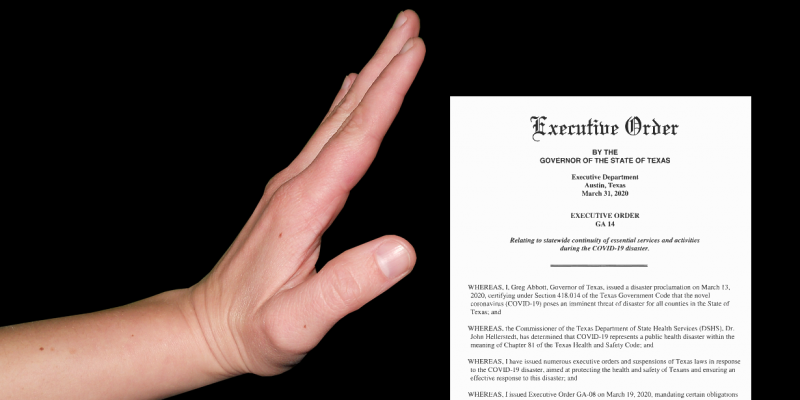 In an emergency petition for a writ of mandamus, a group of conservatives have filed suit against the Governor of Texas for his office’s response to the COVID-19 pandemic.

Calling many of the executive orders “arbitrary” and constitutionally dubious, the petition requests the Texas Supreme Court take action to reverse orders which defy the due process and legislative authority.

Houston social conservative stalwart Dr. Steven Hotze, Reps. Kyle Biedermann and the outgoing Bill Zedler, and three pastors known for their religious liberty activism have joined the petition. The attorney is Jared Woodfill, a former Harris County Republican chairman. (UPDATE: Biedermann’s office told the Houston Chronicle his name was used without permission and did not wish to be included.)

As an example, according to the petition, liquor stores, bike shops, and large retailers have never had to shut down, while clothing stores, gyms, restaurants, bars, and massage parlors were closed.

The petition cites the situation surrounding Shelley Luther‘s Salon a la Mode in Dallas, during which Luther spent time in jail for reopening and was later released at the order of the state supreme court. The petition also notes the case of real estate agent Gabriella Ellison who reopened her Odessa bar Big Daddy Zane’s and was arrested along with armed supporters — without being released.

“Governor Abbott’s numerous executive orders related to the COVID-19 pandemic violate the Texas Constitution …” the petition’s conclusion stated. “Even if the executive orders were founded upon legitimate constitutional authority (which they are not), they are unconstitutional as applied because they were instituted without due process, violate equal protection, and are composed of provisions that are arbitrary, capricious, and which are not the least restrictive means for advancing the government’s purported compelling interest (i.e. protecting public health).”

In recent weeks, Abbott’s office has dropped or loosened restrictions as the coronavirus continues to subside in the Lone Star State.

Interested in more news from Texas? We've got you covered! See More Texas News
Previous Article Miraculously, People Are Waking Up to the Real Enemy, and We May Have COVID to Thank for That
Next Article A WHOPPING 94.6% of Louisiana adults qualified for $1,200 coronavirus checks