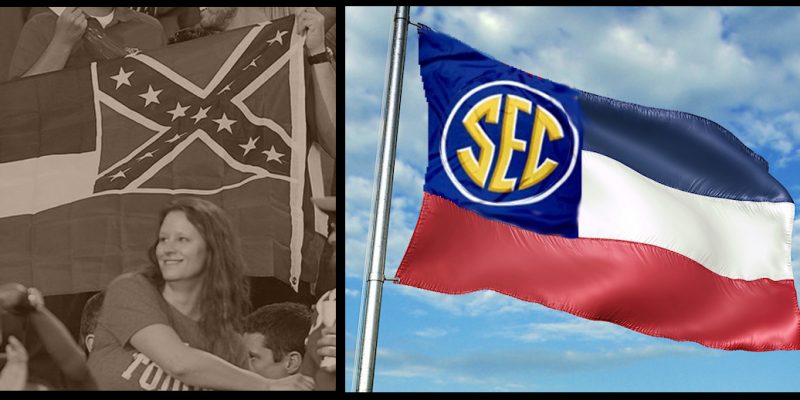 Conceding after a grueling month of economic sanctions and fears of populist revolt, the Mississippi legislature formally surrendered to the Southeastern Conference (SEC) on Sunday.
As a surprise to political observers, SEC, originally a collegiate athletic conference, quickly became a bloc as it began to seize political power during a weak moment for state legislators.  Americans have been increasingly distracted by Wuhan Virus and riots to disband police departments.
Skipping watching NASCAR and church potlucks, Mississippi Senators agreed as part of the surrender treaty to replace the corn pone white supremacist Rebel flag emblem on the current state flag’s upper-left corner with SEC’s logo.
The new flag, to begin flying in time for football season or whenever Gov. Tate Reeves gets around to it, will rally Mississippians around Astro Turf rather than hallowed battlegrounds of a conflict waged a century-and-a-half ago. Fully 99.9% of historians and scholars agree the American Civil War was fought entirely over the issue of slavery.
“As coronavirus and boycotts threaten to decimate the NFL and college football, the choice has become painfully clear that football is becoming the new ‘Lost Cause,'” said Brett Sterling, SEC’s Vice President of Equality and Justice Affairs. “If we don’t do something and now to open up our stadiums to diverse new audiences, then our stands may end up looking like NASCAR’s soon. And who wants that?”
Nearly four dozen of Mississippi’s university athletic directors and coaches came to the Capitol to lobby for change, frightened of losing any chance they have to spend taxpayer dollars and student tuition on SEC championships.
Lawmakers seemed ready to pounce on an alternative design presented by the Mississippi Baptist Convention with the words “In God We Trust” on it. However, following impassioned speech from Sterling, the legislators opted to go with the SEC design.
“The last thing anyone wants is NFL-style kneeling by college athletes who believe in the separation of church and state,” he said, applauded by moderate Southern Baptist leaders present.
“This is the moment we have been waiting for,” said Karen Harding, a mother of four who dragged her kids out on a Sunday afternoon to watch history being made. “For the last four weeks, we have been deeply embarrassed by the hatred and social injustice that we never knew this flag represented. Our long journey is finally over!”
Harding said in 2001 she voted in a statewide referendum to keep the flag design. Watching Millennials rally for something they were told to believe in by their college instructors, she said, inspired her to change her mind.
“It’s beautiful. Just beautiful,” she said, choking back tears, as her children played atop a Civil War-era cannon. Now I don’t have to feel guilty about the South winning the war every time Ole Miss scores a touchdown.”
Activists from Mississippi State’s Social Justice Collective had previously said this would be the beginning of “a New Mississippi.” Immediately following Sunday’s vote, though, the young community organizers met outside the state capitol for the “Culture Can’t Be Canceled” rally. The goal of the rally was to announce a goal of renaming the capital city of Jackson, Miss. — so named for slave-owning President Andrew Jackson.

The impromptu group of social justice warriors announced they had indefinitely postponed plans to host a public burning of a pile $20 bills they had collected from fellow guilt-ridden students.

The House and Senate met Monday behind closed doors with SEC officials and NCAA representatives to discuss a transition of power. An anonymous source that we’re totally making up said future legislative elections may resemble something similar to a college football scouting program and rounds of drafts.