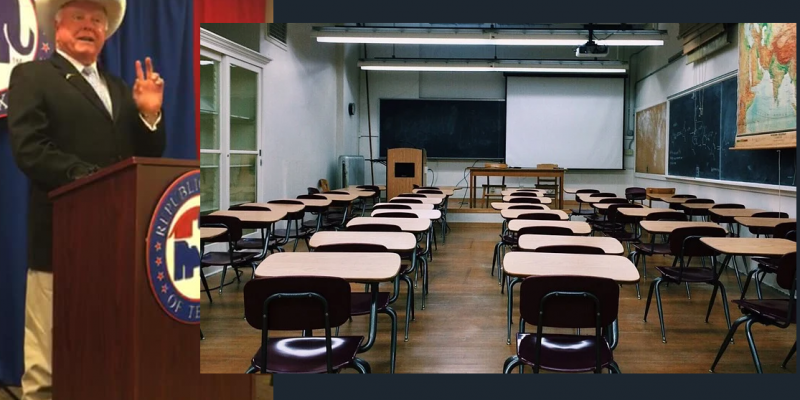 A familiar coalition of school choice proponents hope an unfamiliar situation will bring new energy to the perennial cause.

The “Fund the Parents” campaign was launched this morning via a press conference at Texas Republican headquarters in downtown Austin. Speaking were Texas Agriculture Commissioner Sid Miller — himself a former school teacher and legislator — Republican Party of Texas Chairman Allen West, and Allan Parker of the socially conservative Justice Foundation.

In the state’s response to COVID-19, the coalition argued, executive action has been taken designed to protect the rights and the well-being of Texans, including numerous business closure orders, social distancing requirements, and disbursements of funds for contact tracing, protective gear, etc. School choice in the form of funding for “off-campus instructional programs,” they said, could give parents additional options to navigate the unique challenges handed to them by COVID-19 and government responses to the situation.

According to the coalition’s website, an “off-campus instructional program” is a wide definition: “Texas education law already allows for the Commissioner to adopt regulations for ‘Off-Campus Instructional Programs’ allowing existing Average Daily Attendance (ADA) education funds to pay for programs for parents — micro-schools, private schools, and others — that are not part of their district’s schools.”

The petition’s wording is simple:

We hereby petition the Governor, and the Commissioner of Education, to immediately adopt policies to accomplish the following:

Parents should be granted the ability to enroll their children into alternative educational programs, public or private, if their school district fails to open for full-time in-person learning, or if the parent believes such program to be in the best interest of their child. Under such policy, funding should follow the child to assure that each Texas student continues to have the educational opportunities they deserve.

The accompanying plan itself is only a little more detailed, and gives most of the policy-crafting to Commissioner of Education Mike Morath. The plan, as it stands allows parents to choose a school or alternative education arrangement other than their designated public school if …

“This is not an attack on public education,” Parker said, but a means to give parents additional flexibility in where to place their children.

The state funding per child enrolled “will follow the child,” Parker said. But as for any federal revenue from lost average daily attendance, “the district gets the money for the child, even if they’re being educated somewhere else,” Parker explained.

Miller said the plan is simple and “makes too much horse sense.”

“I can tell you as a former legislator, it doesn’t take the legislation — it just takes stroke of a pen from the Commissioner [of Education],” Miller said, noting that the group encourages the Texas Legislature to review any actions taken in the Spring.

If a school is not meeting in-person at all, and a child performs better in a social setting, parents should have the power to move their children to another school, Miller said.

West emphasized the importance of children to socialize as part of the educational experience, but if parents feel that health safety is a priority then they should also have the power to move their children to a school that offers a more robust virtual program.

“Let’s find out what can be accomplished for our children,” West said.

The video of the press conference may be read here: https://www.facebook.com/MillerForTexas/videos/599663454050789