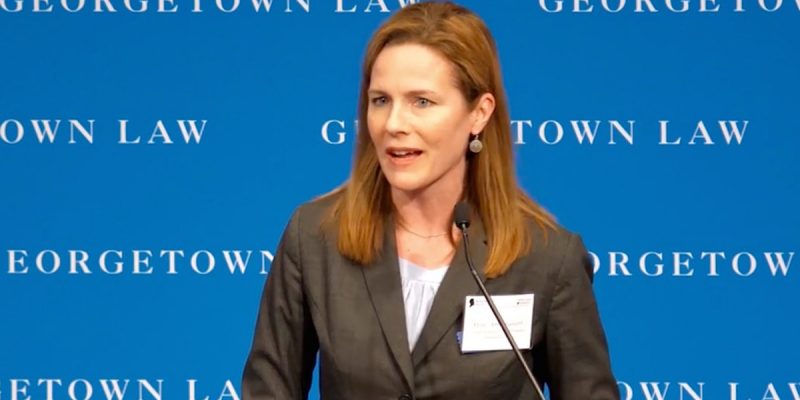 I wrote over the weekend at The American Spectator that President Trump ought to nominate Amy Barrett to fill the vacancy on the Supreme Court created by Ruth Bader Ginsburg’s death and the Senate ought to ram her nomination through with blinding speed regardless of what the Democrats think.

The vanity of Ginsburg’s attempt to hold the seat for the Left, regardless of the Supreme Court balance that entails, did not reflect well on her. It was an affront to American democracy, not something to be given credit for.

She was advised to retire years ago, when Barack Obama could have appointed her replacement. She gambled on Hillary Clinton, and she lost.

That was Ginsburg’s problem. Not America’s.

Donald Trump has a Republican Senate majority, and he has a candidate who has been recently vetted, ready to go. It is no secret that Amy Coney Barrett, currently of the Seventh Circuit Court of Appeals, is a favorite of the president’s to succeed Ginsburg, and Barrett ought to be nominated forthwith.

Truth be told, Barrett would have been an appropriate, if not a superior, choice for either of the last two Supreme Court vacancies. That’s not a slur against Neil Gorsuch or Brett Kavanaugh, both of whom were qualified and competent justices. It’s just that Barrett is exactly the kind of Supreme Court Justice Trump wants and needs, and with Ginsburg leaving the court on terms not quite her own but certainly terms she dictated, there is no reason to wait.

The Democrats are threatening every kind of retaliation possible, including sending mobs of angry lunatics to the homes of Majority Leader Mitch McConnell and Senate Judiciary Committee chair Lindsey Graham over the past couple of days. Neither were home, but their neighbors had the privilege of being regaled with late-night honks from vuvuzelas and other instruments of noise pollution.

If the goal was intimidation, it isn’t working. It hasn’t worked on Mitt Romney, for example.

“I intend to follow the Constitution and precedent in considering the president’s nominee. If the nominee reaches the Senate floor, I intend to vote based upon their qualifications,” the Utah Republican said in a statement.

Romney said he was merely following the law in making his decision rather than taking a position based on the recent blockade of President Obama’s Supreme Court nominee, Merrick Garland, during the 2016 election. Romney said the “historical precedent of election year nominations is that the Senate generally does not confirm an opposing party’s nominee but does confirm a nominee of its own.”

He added that his decision is “not the result of a subjective test of ‘fairness’ which, like beauty, is in the eye of the beholder. It is based on the immutable fairness of following the law, which in this case is the Constitution and precedent.”

Though Romney’s position doesn’t mean Trump’s yet-to-be-named nominee will definitely have the votes to be confirmed, it does mean that McConnell and Trump can move forward without delay.

Other potential swing votes like Republican Sens. Cory Gardner of Colorado and Chuck Grassley of Iowa said on Monday evening they do not oppose considering a nomination. Only Sens. Lisa Murkowski (R-Alaska) and Susan Collins (R-Maine) have said the seat shouldn’t be filled this close to the election.

The thing to remember is that both Collins and Murkowski voted for Barrett when she came up for confirmation to the 4th Circuit Court of Appeal in 2017.

So did Joe Manchin. And Tim Kaine, of all people.

As Conrad Appel said, the Democrats are going to be the interesting people in this little contest we’re about to have. Because once McConnell moves forward and puts Barrett, or perhaps Barbara Lagoa, through the process, the Republicans are likely to fall in line. So you don’t think the nomination ought to be pushed through. So what? Once you’ve lost on that question and there is a nominee, particularly when that nominee will have the votes to be confirmed even without you, what’s the point of opposing her?

Particularly as a female GOP senator.

Not that it even matters. McConnell can count 51 votes in favor of Barrett, assuming it’s Barrett, even without Collins or Murkowski.

If Manchin is a “yes” vote, which he might be, as he hasn’t said yet what he would do, what about Doug Jones?

Jones is going to lose re-election in Alabama. Tommy Tuberville is going to beat him. The only chance he has at getting re-elected would be to jump on the Barrett train and use that to show how he’s “bipartisan” and “centrist.” We doubt that’ll work, but if he’s a “no” vote he’s deader than Mussolini on November 3.

How embarrassing for the Democrats will this be if after all their caterwauling and even rioting, Amy Barrett gets confirmed on a bipartisan vote with multiple Democrat senators crossing the aisle?

We’d call that a strong possibility.

And if Republicans get irritated seeing their senators making common cause across the aisle, what do you think the nuts in the streets wearing the stupid Handmaid’s Tale costumes are going to say?

The other thing to watch is Barrett’s confirmation hearing. Back in 2017 the Democrats made asses of themselves, from Dianne Feinstein’s ridiculous “The dogma lives loudly within you” comment to Dick Durbin grilling her over the question of “orthodox” Catholics, to Al Franken attempting to paint her as a homophobe for giving a lecture at a symposium put on by the Alliance Defending Freedom. None of it phased Barrett, but it made them look unserious, anti-Catholic and stupid.

That was before Kamala Harris was the Democrats’ vice presidential pick and needed to make headlines. Just wait until Harris tries to have a go at Barrett. Remember, Harris was one of the ringleaders, if not the ringleader, of the cabal attempting to slander Brett Kavanaugh. She’s got to try to score points on Barrett as Joe Biden’s attack dog, but Amy Barrett is just better than Kamala Harris. It won’t go well.

We’re looking forward to this fight. We think it’s going to be a big victory for Trump that will resonate down the ballot, and the Democrats will amplify the effects with their bad behavior.