Apparently, there are some outside agitator types taking advantage of Hurricane Laura’s swath of damage through the southwestern part of the state to spread the story that the Lake Charles area will be going to an all-mail ballot system for the November elections, and Secretary of State Kyle Ardoin is not amused.

My office has become aware of a disinformation campaign concerning voting in parishes hardest hit by Hurricane Laura. Several people have shared false information stating that all voters in Southwest Louisiana will be forced to vote by mail. This is untrue. We are working with clerks and registrars on reestablishing early voting location and emergency Election Day polling places. Please feel free to share my statement, found here and below, on your social media and with your friends and contacts in the affected areas. Please call my office at 225-922-2880 with any questions.

“We are working with the Registrar of Voters and Clerk of Court in both Calcasieu and Cameron Parishes to reestablish early voting locations and emergency Election Day polling locations for the November and December elections. Rumors that voters affected by Hurricane Laura will be forced to vote by mail are unfounded and untrue.”

This was the fake news Ardoin was referencing; it went all over the place on Facebook yesterday. 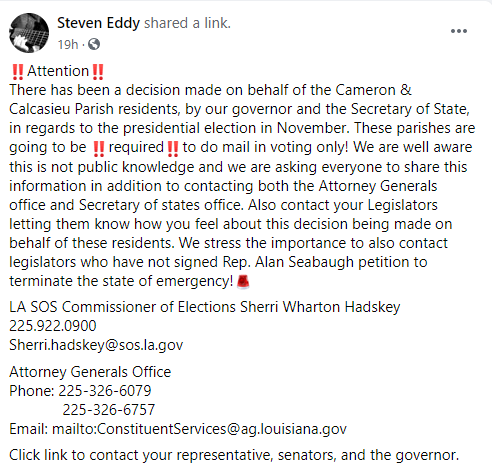 Where that originated, we don’t know.

There’s a theory out there that this was circulated by folks affiliated with plaintiffs in the elections-emergency case in federal court in Baton Rouge, the ruling on which is due out any day now. The plaintiffs in that case are contending that COVID-19 makes it impossible for people to vote at a precinct, which is ridiculous, and that Ardoin’s elections plan which allows only minimal eligibility for mail-in ballots based on COVID-19 (you’ve got to have a doctor’s note saying you have it) is tantamount to voter suppression.

Federal judge Shelly Dick, an Obama appointee, is expected by many to find for the plaintiffs, though she’s almost certain to be overruled by the 5th Circuit if she does. The theory goes that if there is widespread opinion that the Lake Charles area is too beaten up for anybody to vote in person that would only strengthen the plaintiffs’ case.

On the other hand, we think what’s more likely is this was spread by a bunch of overzealous people looking to stir voters up to sign the gubernatorial recall petition and also to get them to pressure their state representatives to sign the petitions overturning Gov. John Bel Edwards’ emergency orders. If there’s no emergency, there is no basis for any special COVID-19 election rules, so you make all these people in Lake Charles think the only way they’re going to be able to vote in November is to get rid of the COVID-19 emergency.

But there is no reason to spread disinformation in order to rile people up at this point.

People are already riled up. Both for getting their state representatives to sign that petition, which we should know the result of Thursday when the House meets (it was to be today, but the false alarm over Hurricane Sally induced a postponement), and for the gubernatorial recall. The first of those, we would expect to see become a reality. What happens with the second, which is admittedly more of a long shot, will depend to an extent on Edwards’ reaction to the first.

Either way, Ardoin insists that they’ll have the voting machines up and running and ready to count the votes on Election Day. So if you see any more of this screechy doomsaying about all-mail ballots in Lake Charles, you might want to shoot it down. It isn’t true.

Interested in more news from Louisiana? We've got you covered! See More Louisiana News
Previous Article LINDLEY: I Fled Tyranny Once; Now It Has Followed Me To America
Next Article VIDEO: DJ Rhett’s Hilarious “Tremors” Spoof Of JBE