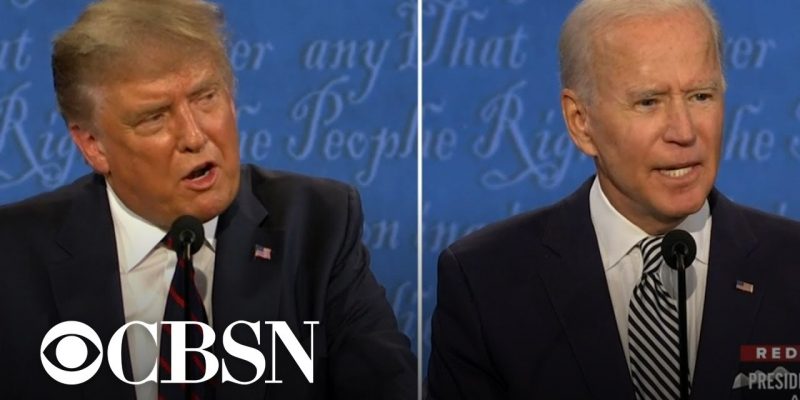 Well, just as everyone expected it was a heated debate, disjointed at times but always spirited. Moderator Chris Wallace had difficulty reining in the participants, but he did the best he could as both candidates repeatedly talked over each other and hurled insults back and forth. Quite frankly, this may well have been the most difficult of all Presidential debates to moderate. Mr. Wallace could well be forgiven for taking off the next few days to relax.

Both candidates had prepared, but let’s give the President the edge on where he wanted to go with his answers and rejoinders. There is also no doubt that President Trump was in command virtually the entire time- he was the more forceful of the two participants and he was also quicker on his feet. Joe Biden appeared to have some trouble choosing his words and he slurred more than a few. While the President was no wallflower, it was Joe Biden who called Donald Trump a “liar”, a “clown”, a “fool”, a “racist”, and shouted “would you shut up, man”. Joe came close to losing it altogether on several occasions. Donald Trump was clearly better at handling the pressure of the moment.

Basically, the President won the debate on both style and substance, and won it handily. This wasn’t immediately apparent right after the debate had concluded and we settled back in our chairs to catch our breath. But after ninety-six minutes, you knew where the President stood on the issues, and the same could not be said of Joe Biden. The President answered more of the questions, while Joe Biden waffled, reversed himself, or simply refused outright to answer. Biden often rambled on in “feel-good” generalities, without really answering the question. President Trump answered directly and forcefully, and then kept demanding answers from Joe Biden which were never forthcoming.

When asked about truly dangerous Democrat proposals like packing the U. S. Supreme Court with more than the traditional nine justices to water down the conservative majority, or ending the long-used Senate filibuster rule on legislation, Biden stated:

“The issue is, the American people should speak. You should go out and vote.” Thank you for that important bit of advice, Joe. However, he then went on to admit: “I’m not going to answer that question.” Apparently, the American public was not worthy of an answer.

The President hammered Joe Biden on his and his family’s past ethical problems and questionable foreign deals, particularly Hunter Biden’s Moscow, Ukraine, and China payments. Joe never even attempted to answer what services his career-challenged son had performed (or was even qualified to perform) for the millions in cash received from these hostile foreign nations.

What will be the likely impact of this debate on the election?

On the principal issue facing our country, the reopening of the economy and our schools, the President was clearly the winner. Our economy must be reopened now or we will soon suffer a catastrophic depression which would likely take decades to overcome and cost millions, not hundreds of thousands, of American lives. The federal government will shortly go broke trying to prop up the entire nation. Joe Biden’s prescription for addressing the effects of the pandemic, further delays in reopening the economy and a tax increase in the bargain, would be every bit as devastating as the President asserted.

So Donald Trump solidified his base (if that were necessary) and probably picked up additional support from the suburbs. Joe Biden was forced to disavow several defining positions he had adopted during the Democrat debates. (Remember the Green New Deal, defunding the police, etc.?) Biden’s performance last night will likely result in the defection of many left wing voters and should cause other Democrats and independents to question his overall credibility.