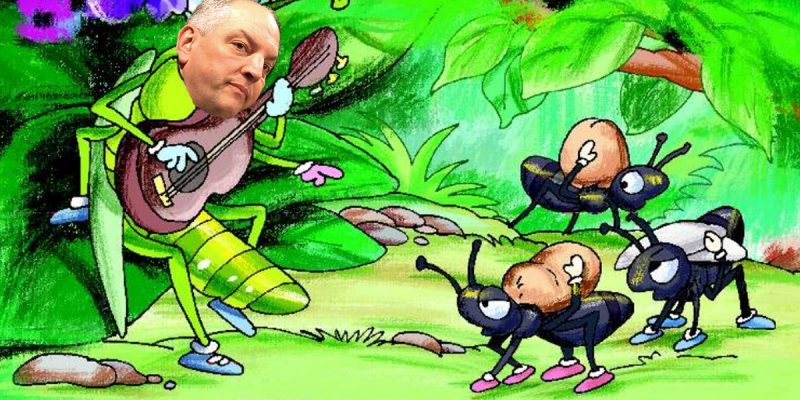 The guy otherwise known as Democrat Gov. Edwards, in his handling of the Wuhan coronavirus pandemic has followed the liberal Democrat playbook perfectly: create a problem, then claim that more government intervention will solve it. Edwards, because of his persistent ignoring of science, continues to employ some of the most draconian restrictions among the states as Louisiana, despite that restrictiveness, continues to suffer more than any other state. It now is the only state ranking in the top ten of total virus cases (first), current hospitalizations from it (tenth), and total deaths by it (fifth) per capita.

Even as his policy hasn’t proven very effective – because it has slowed the acquisition of herd immunity from a more saturated start point (because of Carnival celebrations that acted as accelerants) that has allowed the virus to linger longer and thereby threatening more vulnerable individuals longer – it has proven brutally effective in punishing the state’s economy, more than any other state’s.

This has created two immediate crises, one involving state finances, the other its local governments. The state’s unemployment trust fund has become depleted, necessitating borrowing from the federal government which will demand repayment with interest in late 2021, as well as trigger tax increases and benefit reductions. Local governments have lost significant sales tax revenues and in many cases gambling excise taxes.

A recent Legislative Auditor report pegs the cumulative loss to all these governments for next fiscal year at $714 million and about $400 million more through 2025. It would not be surprising if something like that figure the state will end up borrowing. And the longer Edwards keeps current restrictions going, the higher those figures will go.

Regrettably, Louisiana could have avoided having to pay back so much, if anything, and its local governments didn’t have to come under so much pressure. While the Legislature slogged through two sessions earlier this year, Congress passed the CARES Act which apportioned about $1.8 billion in aid to the state. Among permitted uses of these dollars: unemployment benefits payouts and pass-through funding for local governments for anything remotely related to battling the pandemic.

Instead, Edwards shoveled as much as he could to prop up current levels of state spending – even working in a $600 million increase in year-over-year general fund expenditures for this year – handed over $600 million to local governments, and spent nothing on refreshing the trust fund. Foolishly, the Legislature agreed.

At least it seems ready to try to correct its mistake, with a special session on the way that might include budget cuts; whether Edwards wouldn’t veto any is another matter. But that can’t do much to undo the damage already done that Louisiana easily could have avoided.

Because a number of states showed foresight. In fact, almost every one in the south, with Alabama becoming the latest, made sure they set aside CARES Act money to prop up their trust funds. Rather than do that, Edwards blew it all and now claims the federal government must cough up more to compensate.

The same tune comes about local governments, to which the federal government has been anything but tone deaf. Republicans in Congress have proposed CARES Act rules changes and an additional $150 billion to go directly to local governments that would provide $300 billion of relief. Louisiana’s share of the extra by population would amount to over $2 billion.

Either way, Edwards has been the grasshopper, spending away while letting problems mount, if not causing some of them with needless economic restrictions, when the state needed an ant.


Interested in more news from Louisiana? We've got you covered! See More Louisiana News
Previous Article Analysis: Louisiana’s debt burden at $21.6 billion before COVID shutdowns, $17,100 per taxpayer
Next Article PERRICONE: You’re About To See How Much Anti-Catholicism We Really Have In The US