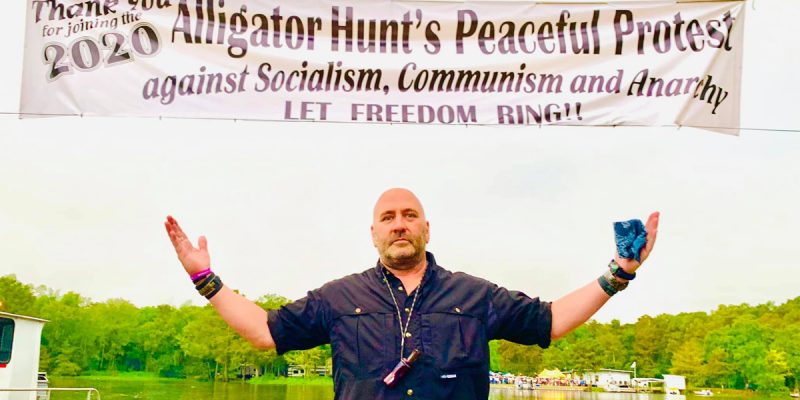 It seems like it was quite some time ago by now, but U.S. Rep. Clay Higgins, whose congressional district includes Lafayette, was called an “idiot” by a cowardly member of the Baton Rouge Advocate’s editorial staff who lacked the sand to put his name on the editorial. The offending piece fell under the “our views” byline; we’re reliably informed that means there’s an 80 percent chance it was the fraudulent has-been pseudo-moderate Lanny Keller who wrote it. We’ll just assume it was Keller, and if it was one of the other toads on the Advocate’s editorial staff, like Mark Ballard or Will “Works Cheaper Than Jarvis DeBerry” Sutton, not much of what follows would change.

Why was Higgins so maligned? Because he had the temerity to voice what was in the minds of a good two-thirds of the congressional district; namely, that the Black Panther wannabe militia organization NFAC, which stands for “Not F*cking Around Coalition” but, in light of their performance in their latest demonstration in Louisville should be more properly known as “Needs Fire Arms Classes,” was taking their lives into their hands coming to Lafayette immediately after Hurricane Laura near-missed the area. Higgins, in a Facebook post, informed the NFAC that what they were planning was a “one-way trip” and that each member should “get your affairs in order.”

As we noted, Lafayette is one of the most armed-up places in America and people who live there shoot every kind of animal under the sun and find great ways to cook them. These are not people you want to threaten, as this video makes perfectly clear. Higgins’ words expressed perfectly the likely outcome of an NFAC invasion into Cajun Country.

But for Keller, or whichever other make-believe sophisticate wrote the “Our Views” piece in question, such talk belied a lack of intelligence on Higgins’ part.

It’s been two weeks, and the NFAC hasn’t showed up for one of their fratricidal paramilitary parades. Al Sharpton came, but the NFAC didn’t.

Why do you think that was?

We’re pretty sure it has nothing to do with the simperings of Lanny Keller, who with just a little acting talent might have been cast as an extra in the Shire scenes of The Hobbit. The Advocate can’t take credit for dissuading the NFAC from coming to a city overrun with Laura refugees and recovery workers.

At this point Higgins looks an awful lot like the Cajun St. Patrick, who drove the snakes away. If nothing else, you can see what Higgins said and what the NFAC did, or didn’t do, and it’s a pretty straightforward conclusion that he’s effective.

How effective is Lanny “Fredo Baggins” Keller? He’s been at The Advocate for decades, and that paper is a shell of what it used to be. Keller sits around that newsroom waiting to be laid off like everyone else there, and he passes judgement on those more successful than himself.

This isn’t even the first time this year that Keller, or somebody else hiding behind the “Our Views” byline, slandered Higgins for things they disagreed with. It’s a pattern at this point.

Keller ought to apologize to Higgins. If he won’t, the Advocate’s owner John Georges, who calls himself a conservative and continuously makes excuses for the snooty leftists he employs at that paper, ought to publicly apologize on behalf of the entire newsroom.

And then give Keller those walking papers everybody knows are coming.

Bear in mind that Keller popped off about Higgins just after his incompetence ran off Dan Fagan, the Advocate’s only conservative columnist, two weeks ago. Fagan, who’s now a regular contributor here at the Hayride, noted in his first post back home at our site that the straw which broke the camel’s back for him was when Keller made a material alteration in editing a column to change its meaning, a gratuitous breach of journalistic ethics Dan was totally justified in resigning over.

But that’s just another day at Louisiana’s only major fishwrap.

And while an apology is due Higgins in spades, we all know it isn’t coming. The Advocate, and its putrid editorial staff, will go on pretending they’re smarter and better than everybody else until the wheels completely fall off and Georges fires the lot of them.

At that point it won’t be much of an argument who the idiots are.