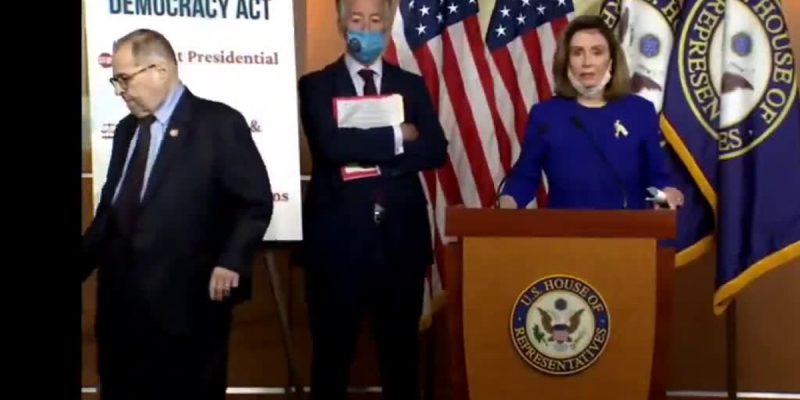 Maybe there’s another explanation for what Nadler was doing. But since there has been no reporting since this happened that Nadler had a stroke, and since we know for a fact that this is not quite his usual waddle from a podium to some other venue, it’s difficult to theorize exactly what else might be the explanation for this rather bizarre video clip starring the pathetic clown Democrat congressman from New York and House Speaker Nancy Pelosi…

The joke goes that at Nadler’s age and in his physical condition, he should have absolutely no trust whatsoever for a fart.

This is somebody Pelosi put in charge of the House Judiciary Committee, and he’s an abject laughingstock. The least impressive person on Capitol Hill, which is heavily populated with highly unimpressive people.

And he can’t help, while he’s speaking on public policy at a Capitol Hill podium, from crapping his pants.

This is what the Democrat Party has come to. The old joke calling them Democraps is now legitimately true.

Of course, do a Google search on the subject and you will not find a single mainstream media article about something that would be national news for days if it involved Mitch McConnell or Steve Scalise or, heaven forfend, Donald Trump. Instead, let the bizarre troglodyte Jerry Nadler pinch a loaf in his pants in public during a congressional press event, in front of a slew of reporters, and it isn’t even reported on.

This is in itself more of a prurient and snicker-worthy little story. But what it says about the bias and slant of the national news media and the utter propaganda our news organs have turned into, when they will ignore something like this on the same day the full scope of Hunter Biden’s criminality comes to the fore, which they also refuse to report on, and on the same day there are riots in Louisville and two cops are shot largely because of crowds stirred up by abjectly false media reportage of the Breonna Taylor case, is not good. On a day like yesterday you start to realize, if it hasn’t already dawned on you, that our legacy corporate news media is an abject cancer on this country.

And that its job performance stinks. It stinks to such an extend that Jerry Nadler’s pants don’t quite come off as the worst olfactory aggression around.