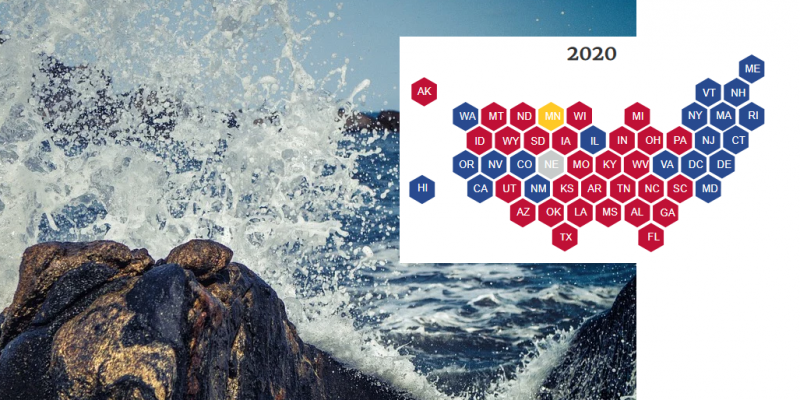 The nation remains largely Republican as the smoke clears in the 2020 general election.

Though not at the high water mark of control, Republicans continue to dominate state legislative seats.

Judging by what we know of 2020 general election results, Republicans managed to pick up at least two chambers with a strong possibility of three — rather than suffer losses — in the 86 state-lege contests across 44 states. By contrast, Democrats seem to have been unable to flip any state legislative chamber in 2020.

Here’s an overview of the breaking of an illusionary blue wave against the statehouse doors.

As of right now (i.e. before the new terms begin and votes are still being counted in many places) of the 7,383 state legislative seats and 99 legislative chambers in the U.S., there is a Republican majority in 59 chambers and a Democratic majority in 39 chambers, exempting the Alaska Senate where a power-sharing agreement is in place.

When you add legislative control plus the governor’s seat (what political insiders call a “trifecta”), that makes for 21 Republican-dominated states and 15 Democrat-dominated states.

AFTER THE VOTES ARE COUNTED

Republicans established trifectas in Montana and New Hampshire with the election of Greg Gianforte and Chris Sununu, respectively.

At least two legislative chambers appear to have flipped after the Nov. 3 election, with one possibility:

With these flips Republicans will now control an estimated 61 or 62 chambers nationally.

FROM THE HIP: While still far from the Democrats’ 1975 record of control over 37 legislatures (both chambers), Republicans are close to maintaining their 2016 record of 32 states (assuming Alaska flips). Minnesota is projected to be the only split state with a Republican House and a Democratic Senate.

While it’s easy to dismiss these as state-per-state affairs and not indicative of the nation’s political orientation, consider the following when looking at the nation as a whole:

1. Redistricting. While many states have so-called “independent” redistricting commissions, Republicans appear well-positioned to control House redistricting processes in at least 19 states. That means Congressional districts, too.

2. Partisan influence over state politics. In 2019, all but one legislature was controlled by one party and that trend will likely continue past 2020. What that means is voters are choosing state legislators by party, not by their stances on state-specific issues, regional concerns, rural/urban divides, etc. This trend extends the fights we see on Capitol Hill to the capitals of each state. But this has a way of providing 50 “test cases” for federal issues that have yet to make it past a congressional committee. More Republican legislatures have an effect of dashing the hopes of various liberal schemes waiting in the wings.

3. Money. Using Texas as a case study, Democrats outspent Republicans by $14 billion. The result of that may have been more votes for Democrats (along with local and regional victories, especially in large cities), but with zero state executive seats won and the balance of the Texas Legislature a complete stalemate (Republicans lost a left-leaning House member in the form of Rep. Sarah Davis and Democrats lost Rep. Gina Calanni to returning conservative representative Mike Schofield). While Democrats are quickly realizing the path to the White House is difficult without Texas they will continue to try and flip it, but not without a prolonged series of fights. Expect more money to be spent on “battleground states” — and various outfits to pre-emptively call reliably red states “toss ups” — but don’t expect major results.

At our most basic level of federalism, the state legislatures, the U.S. remains a center-right nation — even while Joe Biden boasts to have the most popular votes in American history on his side. The blue wave, by and large, may have been mostly an illusion driven by presidential politics.