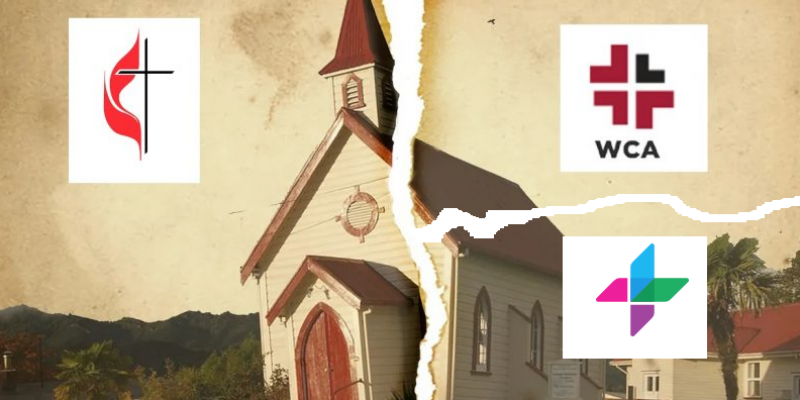 Once conservatives make their “gracious exit” from the United Methodist Church next year, those on the far-left fear that what remains still won’t be liberal enough for their “queer, strange fruit” tastes.

Though a proposed, three-way schism in the nation’s second-largest Protestant denomination was postponed this year due to COVID-19 concerns, the fracturing continues.

Making it official after Thanksgiving, members of the leftist coalition announced they have formed the Liberation Methodist Connexion, a new denomination for those wanting to go even further left than “centrist” leadership would allow. According to its website, the newly minted denomination is “a grassroots denomination of former, current, and non-Methodist faith leaders working on the unfolding of the kin-dom [sic] of God.”

Already, Traditionalists (a category describing conservatives, Evangelicals, sticklers to ancient worship patterns, etc.) have formed the Wesleyan Covenant Association (WCA) as a vehicle by which to start a new Methodist denomination. They’re well on the way, and a church rule book is in draft form.

A “Protocol for Separation” provided plans for a “gracious exit” for three denominations to be carved out of the existing UMC — one for conservative come-outers (like WCA), one “progressive” (e.g. the Liberation Methodist Connexion) and one for the stay-inners currently termed as “centrists” and likely to mirror closely the existing UMC. According to the protocol, those leaving according to the rules would be able to keep their buildings, property, pensions, and other assets without penalty.

The framework for a leftist denomination was laid in March of this year in Dallas, as UM Forward and other activists hosted the Trailblazing the Liberationist Methodist Church conference. Participants complained that the 16-member body that drafted the Protocol for Separation did not represent their views such as “full inclusion” and various government-enforced and -funded social justice goals.

Of 40 initial collaborators, Rev. Althea Spencer-Miller has emerged as a figurehead (the denomination’s new website lets readers know she prefers the pronouns “she” and “her” in case any Hayride readers had any doubt). According to Religion News Service:

The LMX seeks to embrace the “full participation of all who are living out their God-given identities and expressions,” according to the site. That includes people of all gender expressions and sexual identities, races and ethnicities, mental and physical abilities, sizes and ages.

Its theology “is not written in stone,” the website said, but it builds on Methodist theology with various expressions of Liberation theologies, which were first developed by Latin American Roman Catholics in the 1950s and 1960s.

Correct doctrine is less important to the new denomination than correct action, collaborators said during Sunday’s presentation. That action includes reparations, caring for the earth, and finding new ways to live together outside of systems like colonialism, white supremacy, patriarchy, clericalism and heteronormativity, they said.

“We seek not answers that lead us to correct doctrines as to why we suffer. We seek correct actions, correct praxis, where God sustains us during the unanswerable questions,” Spencer-Miller said.

God was there in the seeds of the movement John Wesley started, she said.

“We are its queer, strange fruit,” she added.

RNS noted the denomination would start off with $25 million in the bank with its headquarters in Connecticut. Its next online worship service and meeting is set for New Year’s Eve.

The structure of the denomination is up in the air as an “interim wisdom council” meets. For now, it seems the group “rejects hierarchy and what its leaders term ‘colonialist’ structures,” meaning it may favor the local congregation being the final authority as many leftists proposed during the 2019 UMC General Conference. It may also allow for multiple affiliations and for congregations to stay connected to the UMC.

From the hip: First, a word about the terms being used by the new denomination.

“Connexion” is the British English rendering of “connection,” which was the way the early Methodists under John Wesley and George Whitfield described their movement’s leadership structure. This indicates a move toward a looser structure which mirrors a trend we’ve seen before with smaller liberal fragments of larger denominations (more on that below).

“Liberation” refers to what is known as Liberation theology, owing its origins to Central American Marxist sympathizers and gaining favor among those advocating the rights of tenant farmers and radical Civil Rights activists. (Remember Jeremiah Wright, Barack Obama‘s former pastor?) It’s a theology centered around fleeing and resisting an oppressor, and often invents oppression where it does not exist or exaggerates it.

The name is accurate as to their intentions.

Secondly, let’s look at how it relates to the Protestant landscape and where things are headed.

Typically, and prior to a denominational split, liberals, progressives, and various unorthodox thinkers dig their heels deeply into the framework and take over institutionally. Their preferred attack is to legislate values which cast into doubt biblical teachings and traditional morals.

Throughout the last century, “Modernists” took over boards and seminaries in the mainline Methodist and Presbyterian denominations — with conservative splinters being the smaller factions following inevitable parting of ways. Congregationalists, Lutherans, and more recently Episcopalians can point to a similar history of liberals capturing the institutional high ground with conservatives playing the role of “come-outers.”

Not so with Southern Baptists, who do not have much in the way of a framework to take over. Since they are largely congregational (local congregations cooperating voluntarily as a larger “convention” or an “association”) there was nothing for the usual fans of big government (whether secular or sacred) to latch onto. The result was smaller schisms on the left such as the Cooperative Baptist Fellowship (a moderate denomination founded over disagreements over women in ministry and leadership structure) and the Alliance of Baptists (formed to allow for the ordination of homosexuals). By comparison, the Southern Baptist Convention is the nation’s largest Protestant denomination with 15 million members, overshadows the Cooperative Baptists who claim 700,000 adherents. And following these fractures, a “conservative resurgence” doubled-down in the SBC. A future resurgence may be forthcoming as various Southern Baptist bodies and officers drift leftward.

Back to Methodism. The decision of the WCA to leave the 7-million-member United Methodist Church must be a voluntary one. Consider that conservatives successfully led a global resistance to gay ordination in 2019. The conservatives won. Yet they grow weary of boards, commissions, seminaries, and an unrepresentative College of Bishops undermining them. Expect WCA to take up to a million Methodists with them, even though they will likely retain bishops and a conference structure.

Here’s what’s unusual about the newest development: Prior Methodist offshoots, all of which were more conservative than the mainline body, were less centralized. Many smaller bodies in the Methodist family do not have bishops, for example, and many control property locally. The Liberation Methodist Connexion joins these smaller conservative splinters in that tradition of decentralization. It’s doubtful that they’ll find much theological common ground with Congregational Methodists, Nazarenes, Wesleyans, et al., but they do share a common “connexional” thread.

While the Liberationists won’t take as many members away from the UMC as the WCA (apologies for the alphabet soup in this article, by the way), the removal of both radical left elements from the UMC and conservative leadership may help the UMC steer the ship in its current, centrist direction — but with lower and dwindling membership as Mainline Protestantism continues to crumble.

In summary: the departure of radical leftists from America’s largest Methodist denomination represents not only a moral victory for conservatives but the continuation of the “death by a thousand cuts” of the ever-weakening Protestant Mainline of which the UMC is a part.

Interested in more national news? We've got you covered! See More National News
Previous Article If You’re Looking For Some Reference To Respond To The “No Evidence” Crowd…
Next Article CROUERE: Et Tu, Cassidy?