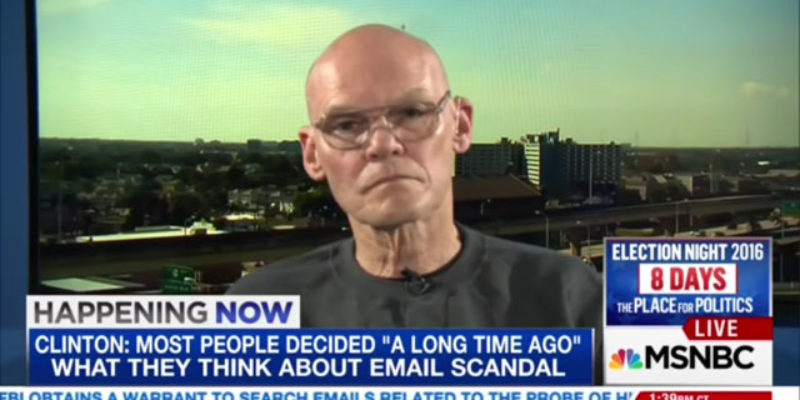 Today’s Quote of the Day comes from an interview James Carville did with Vice that was published yesterday. There are a couple of things about this which are interesting, and we’ll talk about those below…

Sean Illing: What do you make of Biden’s first 100 days?

James Carville: Honestly, if we’re just talking about Biden, it’s very difficult to find something to complain about. And to me his biggest attribute is that he’s not into “faculty lounge” politics.

James Carville: You ever get the sense that people in faculty lounges in fancy colleges use a different language than ordinary people? They come up with a word like “Latinx” that no one else uses. Or they use a phrase like “communities of color.” I don’t know anyone who speaks like that. I don’t know anyone who lives in a “community of color.” I know lots of white and Black and brown people and they all live in … neighborhoods.

There’s nothing inherently wrong with these phrases. But this is not how people talk. This is not how voters talk. And doing it anyway is a signal that you’re talking one language and the people you want to vote for you are speaking another language. This stuff is harmless in one sense, but in another sense it’s not.

Sean Illing: Is the problem the language or the fact that there are lots of voters who just don’t want to hear about race and racial injustice?

James Carville: We have to talk about race. We should talk about racial injustice. What I’m saying is, we need to do it without using jargon-y language that’s unrecognizable to most people — including most Black people, by the way — because it signals that you’re trying to talk around them. This “too cool for school” shit doesn’t work, and we have to stop it. . .

Sean Illing: Sounds like you got a problem with “wokeness,” James.

James Carville: Wokeness is a problem and everyone knows it. It’s hard to talk to anybody today — and I talk to lots of people in the Democratic Party — who doesn’t say this. But they don’t want to say it out loud.

Sean Illing: Why not?

James Carville: Because they’ll get clobbered or canceled. And look, part of the problem is that lots of Democrats will say that we have to listen to everybody and we have to include every perspective, or that we don’t have to run a ruthless messaging campaign. Well, you kinda do. It really matters.

There’s a lot of other stuff in the interview, and it becomes very clear very quickly that Carville isn’t speaking in good faith. The fact that he’s trying to equate Jim Jordan with Denny Hastert makes that clear. He also says that AOC is very bright and Marjorie Taylor Green is an idiot, which is either partially or totally untrue depending on how far you’re willing to go and acts like he can’t understand why MTG gets a pass (maybe it’s because MTG could get everything she wants passed and the vast majority of Americans wouldn’t be any worse off, while only a small portion of AOC’s agenda would screw up tens of millions of households’ finances and lifestyles).

At Power Line, Steven Hayward has a good post about how weak Biden is – and how eye-poppingly polarizing he is – in which he excerpts the Carville interview. But Hayward is a little more generous that we would be…

I think Carville is mistaken in saying that Biden is “not into faculty lounge politics.” He’s wholly captured by it. But I think Carville may be trying to be clever or tactical, by creating some artificial daylight between Biden and the insanity gripping his party.

Ain’t no mistaken about this. Carville is absolutely being “clever or tactical” – or, in more pointed language, he’s dropping a flat-out lie in an effort to push a false narrative out there.

And we can say that with confidence, because Carville did it with Vice after he’d pushed out that bad-faith mendacity to the Baton Rouge Advocate’s Tyler Bridges, who like Vice’s Sean Illing is a partisan Democrat anxious to help spread the Left’s latest propaganda. Carville told Bridges that the results of the 2nd District congressional election in Louisiana on Saturday showed that “wokeness” lost.

Carville is right that the “woke” brand doesn’t sell with the general public. It doesn’t take a genius to figure out that backing the transgender movement, embracing anti-Christian bigotry, praying to the climate-change gods that they might take away everybody else’s SUV and spewing the idiocy of Critical Race Theory is an easy way to get slaughtered in the next election if you aren’t running in a safe Democrat seat.

He’s also right that the only reason Biden was able to get to the White House – if in fact that was accomplished rather than stolen – was that he’d made enough racist statements and had a suitably non-woke persona before he lost his marbles that he was sellable as a different kind of Democrat than, say, Liz Warren or Pete Buttigieg. But Biden certainly isn’t governing that way, and nobody should think Troy Carter’s voting record will be one bit different than KCP’s would have been.

To boil all this down, Carville is telling you that “wokeness” is electoral poison which will lead to Democrats getting annihilated in the next couple of election cycles if they can’t shed that brand. But he’s also telling Democrats to shed the brand but not the substance behind it.

In other words, to ramp up the lies his party is telling the American people.

We’ll see if they take his advice. We’re leaning toward thinking the answer to that question is no. The Left is so enamored with itself and so long ago gave up on trying to persuade anyone of anything that he’s talking to a wall. They’re only going to push harder on woke culture until it costs them power.

Or maybe not. Either way, don’t ever take what Carville says at face value without recognizing the bad faith in it.