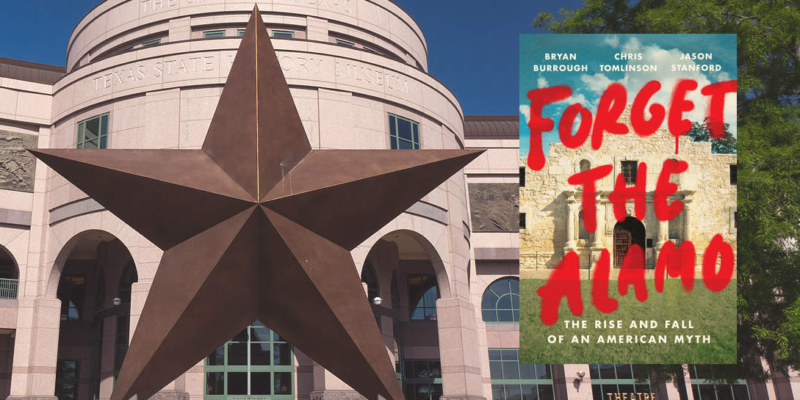 A promotional event for an incendiary new book scheduled for the Bob Bullock State History Museum was canceled hours before it was scheduled to begin.

The trio of writers and publicists behind “Forget the Alamo” was set for an event in front of an estimated 200 registered guests according to the Texas Tribune. That is, until conservative Republican Lt. Gov. Dan Patrick stepped in to defend the Alamo’s honor.

“The Bullock was receiving increased pressure on social media about hosting the event, as well as to the museum’s board of directors (Gov Abbott being one of them) and decided to pull out as a co-host all together,” publishers Penguin Random House wrote in a statement, via the Texas Tribune.

The museum is overseen by the State Preservation Board which manages the entire Texas Capitol Complex. The board, which Patrick sits on along with Gov. Greg Abbott, House Speaker Dade Phelan, and others, were the ones to pull the plug.

As a member of the Preservation Board, I told staff to cancel this event as soon as I found out about it. Like efforts to move the Cenotaph, which I also stopped, this fact-free rewriting of TX history has no place @BullockMuseum. #txlege https://t.co/ua1aSFxHCk

The book investigates the origins of the famed Alamo mission in San Antonio and its legacy — expectedly centered around recent Critical Race Theory suspicions that the primary motive of the Texas Revolution may have been defending slavery. The author-trio dismisses much of the familiar story as a “creation myth” of a nascent republic.

Former Texas Land Commissioner and Alamo caretaker Jerry Patterson pointed out in a letter to magazine editors numerous alleged mistakes and “misrepresentations.” Patterson has since moderated some of his statements following a June 23 meeting with the magazine’s staff.

From the hip: The plot thickens as the controversy builds.

The Writers League of Texas, which sponsored the event, immediately offered the left-leaning co-authors an opportunity to do the event via another venue. “The authors declined to continue, and because they did so, the Writers’ League of Texas cancelled the event,” a statement from the league read, via the Texas Tribune.

What is the benefit of refusing to move the event elsewhere or online? It now goes from a back-page change-of-venue story to a full-blown, banner headline-grabbing speech-suppression narrative. Even if the authors may be gravely mistaken about the strategy behind the Alamo standoff, they know PR and how to generate headlines. The Hayride’s headlines are among at least two generated in the book’s short life.

Patrick, who holds the position Bob Bullock famously occupied for eight years, earned a win here, too. After all, he’s up for re-election in 2022 — though we’ve found his stances on defending Texas history to be largely consistent in or out of campaign season.

Score a political point for both sides.