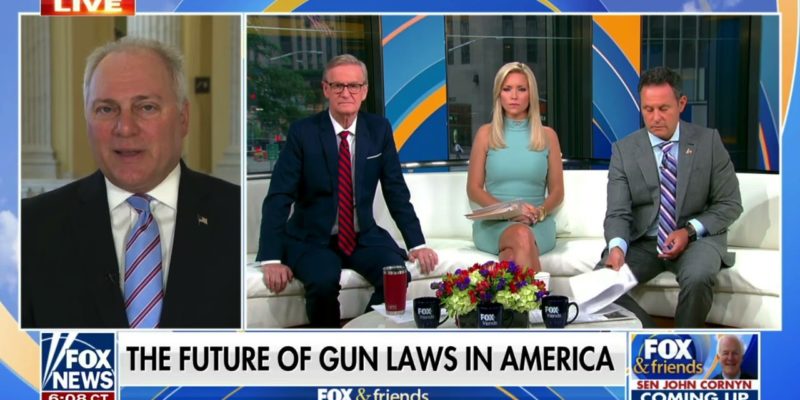 Today’s the anniversary of a day that almost went down as monumental in American history. Five years ago a crazed leftist named James Hodgkinson, whose name few people remember, showed up with a rifle to a Northern Virginia playground where the Republican congressional baseball team was having a practice session to prepare for their annual baseball game against the Democrats and proceeded to send rounds downrange in an effort at political violence.

Hodgkinson was a Bernie Sanders fan, you understand, and he took quite seriously Sanders’ demands for a “political revolution” in America. Hodgkinson, perhaps something of a literalist, recognized the word “revolution” means violence and death and figured he’d be helping Comrade Bernie along by squashing the life out of some of Sanders’ detractors.

One of his bullets shattered the pelvis of House Majority Whip Steve Scalise, who was playing second base at that practice and had nowhere to hide when the shooting started. Scalise nearly bled out, had to undergo a raft of surgeries and needed extensive rehab to walk again.

He was on Fox & Friends this morning to talk about it.

It’s good to mark this anniversary, particularly given the endless idiocy and caterwauling the Democrats on Capitol Hill have been doing over the January 6 protests which devolved into a riot – perhaps a “mostly peaceful” affair in the vernacular of the corporate media shills covering the far-more-deadly demonstrations the Left encouraged following the death of George Floyd.

They’ve gone on and on about how the Jan. 6 affair was an “insurrection” despite the fact nobody appears to have bothered to bring a gun to the Capitol. But when a candidate for the Democrats’ presidential nomination runs around talking about a “revolution” and one of his followers tries to perpetrate a massacre of Republican congressman, that’s not an “insurrection?”

Hodgkinson had his lights turned out by a Capitol Police officer who was doing security for the GOP baseball team. He’d probably have been made a martyr by somebody on the Left if the 2018 election had turned out a little differently. Just like we can expect the California nutjob caught plotting to murder Supreme Court Justice Brett Kavanaugh in an effort to break the Court’s majority for overturning Roe v. Wade and put the abortion debate back into state legislatures where it has always belonged is ultimately going to be hailed as a hero in those same circles. Now they’re just ignoring him, but wait until the coast is clear.

Or the people staging unruly protests in an effort to disrupt the Supreme Court yesterday.

Today is a reminder that the Left is perfectly happy with the concept of political violence. They just don’t want to be on the receiving end, something which is inevitable once that genie is out of the bottle.