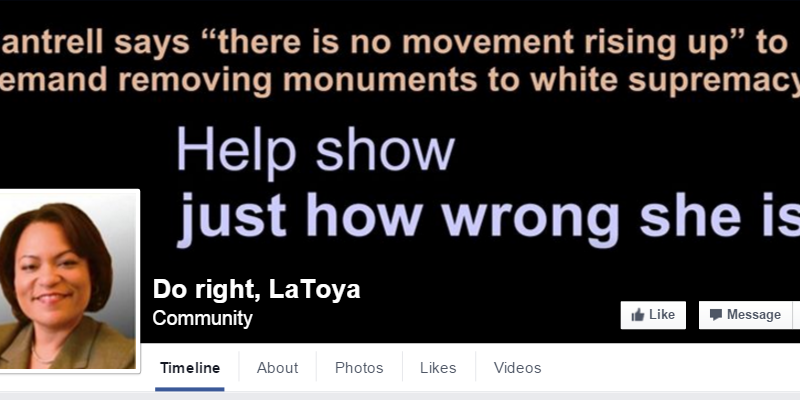 After New Orleans City Councilwoman Latoya Cantrell confirmed her position last week that she does not support removing four historical monuments in New Orleans, an anti-monuments group has gone after the councilwoman on social media.

The Facebook Page ‘Do Right, Latoya,’ was created in response to Cantrell’s stance that Lee Circle should not be removed. The objective of the page is to “encourage” Cantrell to “do the right thing,” saying “Latoya Cantrell has bowed to racist pressure groups and lied to her constituents.”

In a photo on the Facebook page, a picture reads “If she supports White Supremacy, THEN WE CAN’T SUPPORT HER.”

Most recently, though, Cantrell hinted at a compromise on the matter, saying that the monument most in question is the Liberty Place monument. However, proponents of Mayor Mitch Landrieu’s plan say the want more than just the four designated historical monuments removed, they would also like to see Andrew Jackson’s monument removed as well.

Members of the Stand With Dignity and Take Em Down Nola groups spoke directly to Cantrell at a recent City Council meeting, repeating that they were floored that she was not supporting removal of the monuments, as previously assumed back in July.

Besides Cantrell, Councilwoman at Large Stacy Head and District A Councilwoman Susan Guidry could both be ‘no’ votes on the issue, as both have been restrained on their comments about the monuments debacle.

Head confirmed exclusive reports by the Hayride which found that Landrieu began planning to remove the four monuments before he even called for his ’60-day discussion period’ on the issue.

Head said Landrieu began finding contractors to remove the monuments and warehouse space to store them months ago, confirming information the Hayride had reported from anonymous sources back in September.

Possibly the most undecided on monument removal is District C Councilwoman Nadine Ramsey who sources are calling a potential “swing vote” on the issue. Ramsey represents the Algiers area and parts of the French Quarter, which means she may be getting push-back from residents who want to keep the city’s strong sense of history in the Quarter.

Williams and Brossett spoke openly about their hopes to eventually help remove the monuments, while Gray was also a co-sponsor on a motion to push the issue forward to a vote.

The City Council is expected to vote on the issue this Thursday on Dec. 17.