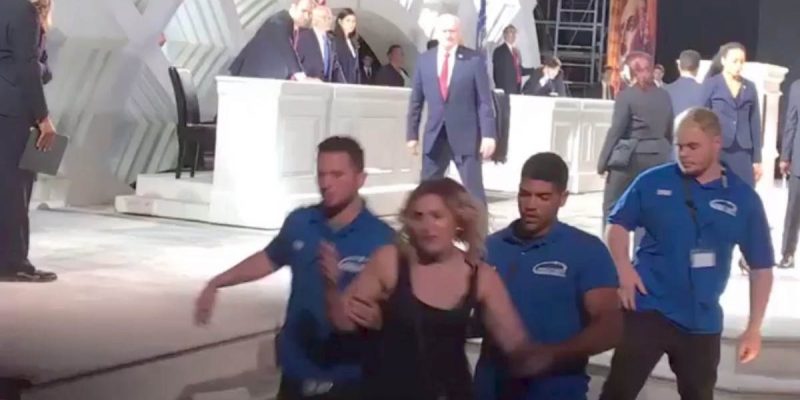 It’s worth weighing in on this, because the Jack Posobiec stunt Friday night in which a protester rushed the stage during a controversial production of Shakespeare In The Park in New York City to disrupt a scene in Julius Caesar staged as a facsimile assassination of President Trump has brought into focus a question which seems to be dominating conversations on the Right.

Namely, how to respond to the escalating abuse coming from the Left? Particularly after last week’s attempted assassination of Steve Scalise and nearly two dozen of his colleagues at the Republican team practice in advance of the Congressional charity baseball game.

We touched on this in our post this morning about the “Stop The Violent Left” ad running in Georgia’s Sixth Congressional District; that ad ties the increasing violence and incivility of the progressive mob to the Democrats’ candidate Jon Ossoff and equates electing him with rewarding that bad behavior.

Here was Posobiec’s stunt, which obviously owes more to Alinsky than Shakespeare…

The real question comes down to this – is it better for the Right to position itself as a defender of civility and integrity in public affairs and politics, trust in the electorate’s virtue and rise above the thuggish, Alinskyite (and worse) conduct of the other side? Or is what’s required the willingness to descend into the gutter and slime the enemy with his own mud? And yes, that’s a question Shakespeare himself would have found interesting. He asked a version of it himself, after all.

From the question of morality, the former is certainly preferable. We’d all like to live in a society where the former is exclusively rewarded by the voters. But it’s hard to argue that’s the society we’re living in now. We know that our culture is declining and that civil society is beginning to break down. We also know that the public doesn’t exclusively reward polite and genteel tactics anymore – if it did, Donald Trump would have been relegated to the status of a minor protest candidate in the Republican primaries rather than President of the United States.

That’s not to say the Right can sink to the tactics the Left is using. For all the media attention paid to those tactics there isn’t a lot of evidence they produce electoral success for the Democrats; in fact, the trend seems to indicate the abuse of the public square by Antifa and Black Lives Matter and the rest of the social justice warrior crowd is poison on Election Night. What that abuse does seem successful in doing, though, is to push dissenting voices out of the culture. When a Charles Murray is de-platformed at Middlebury, or when Gays For Trump aren’t allowed in Charlotte’s Gay Pride Parade, or when a run is made at Sean Hannity’s job through attacks on his advertisers, it’s not likely to affect an election. That’s not even the object of those efforts.

Read the history books, though, and what you’ll notice about the rise of Hitler in Germany is that his Nazis spent an enormous amount of time brawling in the streets with the communists. And when you read those history books you can’t help but wonder what happened to the liberals and the republicans. Was the majority of the German public really either Nazi or Communist? The answer is no; the problem was that public virtue in Germany disintegrated under the pressure the Nazi and Communist street brawlers put on it – and particularly when the weak Weimar Republic simply didn’t have the will or the muscle to put down the barbarians and restore law and order. That the country was in economic chaos was a limiting factor in what the government could do; it all fell apart and allowed Hitler, through a combination of skillful maneuvering, ruthlessness and blind luck, to walk into power without ever claiming a majority of the popular vote.

We aren’t Weimar Germany yet, thank God, but you can’t say the trend is a good one. And with the example of Weimar Germany, and lots of other examples of relatively decent places to live until extremist thug governments came to power through intimidation and violence – and given the destruction to life and property wrought by extremist thug governments, one can make a very solid moral case for doing a little evil to prevent a greater evil.

Disrupting a play is an example of a little evil. Nobody really gets hurt by that. The question is whether tactics like those of Posobiec’s crew in Central Park prevent the greater evil.

Abraham Lincoln suspended habeus corpus. Had he fought for our principles instead of the Rebellion, Democrats would still own all their slaves.

As a means to call attention to an injustice, it is neither an act of “silencing speech” nor “snowflakism” to enter the heart of the enemy and TEMPORARILY disrupt a monstrous gathering. To say otherwise is intellectual dishonesty. The injustice these protesters attacked has nothing to do with a snowflakey inability to handle a play, but rather the hypocrisy of a rodeo clown media sponsoring such a play and the simple fact that until these bullies feel the pain of their own tactics, the war against us will never cease.

What happened over the weekend in Central Park was in defense of our civil rights, which are under direct attack, not just by hard-left activists, but by powerful American institutions (the media, Democrats, Hollywood, corporations), those who sponsor, appease, and justify relentless attempts, including escalating violence, to silence and subjugate us.

But here’s the point I really want to make about this incident: Everything the conservative protesters did comes directly from the progressive protest playbook. Let me give you an example. Back in 2015, Bernie Sanders held a rally in Seattle. It’s a progressive city and there was a big turnout. Before Sanders could get going, a couple of Black Lives Matter protesters got on stage and demanded Sanders give up the microphone. BLM protester: “If you do not listen to her, your event will be shut down.”

So, looking back at the interruption of Julius Caesar by right-wing protesters, I hope you can see that a) it could have been much worse and b) it fits a well-established left-wing protest tactic. In this case, the protesters are trying to shut down speech they have deemed to be a threat, i.e. to the President’s safety. The existence of that threat justifies trying to shut down the play. The only thing that’s unusual about this is that the attempt to “shut it down” came from the right.

I don’t support interrupting performances of Shakespeare. I also don’t think the play is a threat except in the nebulous “climate of hate” sense which the left trots out whenever they find it helpful to blame the right. However, maybe this protest will do some good if it causes people on the left to realize where this is headed. This is your politics, progressives. Can you see now how this is a bad idea? If so then, start by addressing the problem at the source: Your own backyard.

The retort to this is that the assassination of Caesar in the play, at least as it’s written by Shakespeare, is hardly portrayed as justifiable – and therefore it’s pointless snowflakery to protest it as a threat or a civil rights violation.

This may be, but on the other hand Shakespeare didn’t stage the original version as a facsimile of an assassination of Queen Elizabeth. Caesar was Caesar. It’s a departure from Shakespeare to stage the assassination with a Trump character catching the knives, and the audience, who obviously know how the play ends, has been cheering the murder scene with Trump as the victim. They’re not cheering the presentation or the esoteric message about how political assassinations are a poor method by which to effect social change. They see it as blood-porn, and they like it fine – just like the internet trolls gleeful about Scalise’s assassination like that fine.

So Posobiec is sending people in to protest it and shame the predominantly Democrat Shakespeare In The Park audience – he was arrested on Friday for standing up and screaming at them that they were all Nazis, which isn’t the most intellectually consistent statement ever made, but perhaps it will do in a pinch.

The answer to the question, probably, is that a bit of both is required. You need the occasional Posobiec, or as someone else remarked, perhaps a conservative Abbie Hoffmann who will use exceptionally street theater to expose the inconsistencies of the other side, along with a general orientation toward civility – after all, you’re going to need the example if you aim to save civilization.

Most of all, though, your side has to have more fun than the other side is having – because the people who can enjoy their work more are usually going to draw bigger crowds. That’s probably harder to do when the other side is shooting at you, which is the real problem with the direction things are going in.