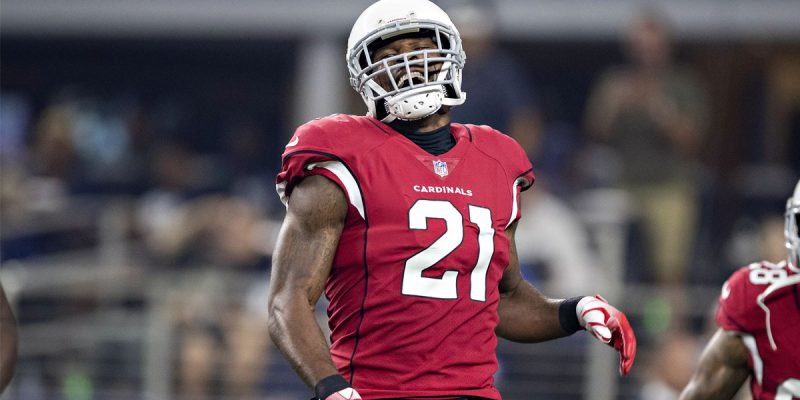 Since today has been Football Day on The Hayride, what with Oscar discussing the crucial #FreeDevin movement involving the injustice done to LSU’s star linebacker Saturday night and Mike Bayham addressing the Saints having expunged the bad juju involving their former inability to beat the Ravens on Sunday, I figured I should cover the quickly-advancing necessity that Mickey Loomis do what is necessary to secure the services of Patrick Peterson.

Why is this a thing? Well, earlier this month it was first brought up by none other than the former NFL defensive backfield great Deion Sanders…

This happened before there was even much discussion about Peterson being on the market. Which has changed, and quickly.

Peterson feels as if the situation is deteriorating and continues to reaffirm to others that he “desperately” wants out, a source said. The Cardinals continue to insist that they won’t trade him, but Peterson keeps asking.

Wilks said he would talk to Peterson later Monday, but to this point Wilks said that Peterson “hasn’t expressed to me” a desire to be traded.

Wilks was asked how he will handle the situation.

“No. 1, I’m not going to indulge in speculation,” he said. “I’m going to sit down and talk to Patrick. Patrick is a captain. He’s well respected around here. He’s well respected throughout the league. Yes, are we in a difficult situation? Yeah, we are. 1-6. Nobody feels great about where we are right now. It’s about trying to turn the corner and make things happen so we can make sure that we get this thing on track. Starting with myself and everybody else in that locker room. That’s what we need to be talking about.”

Wilks can say what he likes, and of course he’s going to present the case as though Arizona isn’t going to trade its superstar cornerback. If he said they were desperate to get rid of him it would be a stupid way to minimize his trade value, and it would demoralize Cardinals fans who, at 1-6, already have enough reason to stay away from a team which isn’t competitive in the league.

But here’s the thing – everybody knows Arizona is in a full rebuild, and considering it’s likely going to take a minimum of two years to bring them back to the status of playoff contender Peterson’s contract will be up by the time they’ll be looking at having a team of any quality. Now is the time to move him and get the best price they can for him.

Let’s face it – if you’re Arizona what you want is draft picks. As many of them as you can get. Players you draft make comparatively little money against the salary cap, which allows you to play in the free agent market to bring in veterans who can lead the young guys you’re stocking up on. That’s how you rebuild a team, and they badly need to do it – particularly while they’re breaking in first-round draft pick and rookie Josh Rosen at quarterback.

What’s a little unfortunate is that the Saints don’t have as many draft picks available as some of the other clubs who might play in the Peterson sweepstakes.

McFadden says Peterson has a preference, and it’s one Saints fans ought to love.

There’s a reason for this – Peterson’s wife is from New Orleans. Not to mention he was an All-American cornerback just up the road at LSU.

The Saints are a little short-stacked to sit at the Peterson table. They’ve got a #2 and a #4 available, which means to get into this mix is possibly going to involve unloading a pick in 2020 as well as in next year’s draft.

In other words, they’re probably going to have to throw most, if not all, their chips into the pot to win Peterson.

Do it. Put that #2 and #4 in the pot and splash it with the #1 in 2020, if you have to. And if the Cardinals would take Patrick Robinson and Ted Ginn in the bargain, add them as well. Robinson, who the Saints signed in the offseason to be their nickel cornerback this year only to watch him get injured as soon as the season started and go on injured reserve, and Ginn, who just joined him on IR, are no loss other than cap space – and where Arizona is concerned that’s not a problem because at 1-6 they’re about trying to get players for next year rather than this year anyway. Robinson costs $2.25 million against the salary cap this year and Ginn costs $4.5 million – so that’s $6.75 million against Peterson’s $11 million, leaving the Saints $4.25 million in the red. They’ve only got a bit less than $2 million available now, but all that means is Loomis needs to get some current veterans’ contracts renegotiated to free up the remainder. It can be done.

Or if getting Arizona to assume some of Peterson’s cap hit costs more in draft picks, so be it.

Look, understand this – this year, next year and MAYBE 2020 constitute the Saints’ current window to win a Super Bowl. This team is primed and ready – and the cornerback spot opposite Marshon Lattimore is the chief obstacle to a championship. Solve that with a player as good as Lattimore is, and you’re now not only a Super Bowl contender – you’re there right now – but you become a favorite along with the Rams, the Chiefs and New England. In fact, as impressive as the Rams and Chiefs have been if you give the Saints Peterson they’re a better team than either of those two.

Particularly if Marcus Davenport continues to develop as a defensive end, and Alex Okafor continues stepping up his play as he returns from that injury last year. The Saints’ run defense is already pretty stout, and that offense – though without Ginn it still needs a third option at wide receiver that Cam Meredith doesn’t look like he’s going to provide so far – is frightening.

And if you trade away Ginn and Robinson you can replace them in free agency. There will be players available. Tre’Quan Smith is going to be a very good #2 receiver behind Michael Thomas; simply find another Willie Snead to be the #3, and either Ken Crawley or P.J. Williams could be your nickel cornerback – they’d compete for that role this year, after all.

Or maybe Tyrann Mathieu, another former LSU superstar who is very close to Peterson from their time both in Baton Rouge and in Phoenix, would agree to come to the Saints as a nickel man next year. Having Peterson makes that more likely, and a Saints defense with Peterson, Lattimore, Mathieu, Marcus Williams, Vonn Bell and Rod Coleman in the secondary would be nothing short of superb.

Just get it done. Peterson gives you the best opportunity to win a ring – potentially two rings – that this franchise has had in two years. If it means gutting your immediate future in draft picks, so what? When Drew Brees is gone sometime after 2019 (and Sean Payton likely goes with him), you’re going to be in something of a rebuild mode after all – and if you’re rebuilding the dirty little secret is you’re better off long term being 3-13 for a couple of years rather than 6-10, considering where you’ll be drafting.

There isn’t a Saints fan around who won’t gladly pay that price in the out years for a shot at glory now. Peterson is one of the best corners in the league and he makes the defense as elite as the offense, plus gives you a potentially game-changing return man.

Make it happen, Mickey. Do it and you’ll be worth your weight in bronze in Canton.

Interested in more news from Louisiana? We've got you covered! See More Louisiana News
Previous Article Bipartisan legislation to restore national water infrastructure will bring $500 million to Louisiana
Next Article Today’s The First Day Of Early Voting In Louisiana, And Here’s A Rundown On The Constitutional Amendments…