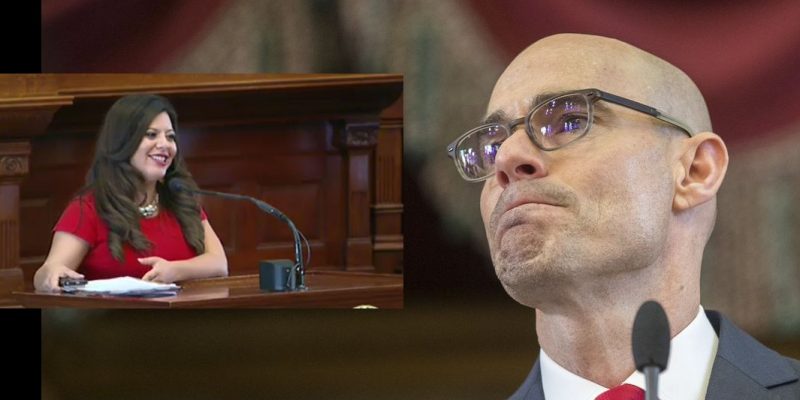 The outgoing Republican Texas House Speaker raised some eyebrows this week with the appointment of a liberal Democrat to a powerful state budgetary committee.

The timing of the replacement — as the state budget is in serious peril following  historic drops in the oil market and economic paralysis brought on by reaction to the coronavirus/COVID-19 situation — has brought criticism from Bonnen’s Republican colleagues.

Speaker Dennis Bonnen removed Rep. Drew Darby, a longtime Republican legislator from San Angelo, from the Legislative Budget Board (LBB) and replaced him with Rep. Mary Gonzalez, a former Capitol staffer and an El Paso-area Democrat first elected in 2012.

The LBB is a joint Senate and House committee which develops the biennial draft budget in addition to reviewing the fiscal health of the state. The other Democratic legislative member of the 10-person committee is Rep. Oscar Longoria. The appointment raises Democratic representation on the committee to two members.

Gonzalez, who garnered liberal media intrigue in 2012 for being the first “pansexual” elected to the Legislature, was appointed by Bonnen as Vice Chairman of the powerful House Calendars committee. She had previously served as Vice Chairman of Agriculture.

“… I am humbled to carry on the work of Representative Drew Darby as a valued member of the Board and trusted voice for our rural communities,” Gonzalez told the El Paso Herald-Post. “Our state’s budget at its core is a reflection of the values of all Texans. In the face of our current health and economic crisis, we will have an even bigger task to provide resources that prioritize working families, our seniors, and our children’s future. I look forward to joining the Board and continuing the work to achieve a fiscally sound budget that puts Texas families first.”

Conservative Republican Rep. Kyle Biedermann questioned the replacement that came with it no explanation from the Speaker:

“At a time when Texas is facing an economic crisis we should be empowering fiscal conservatives who have been fighting to curb spending and protect our savings account. Speaker Bonnen’s actions put more influence in Democrat hands over our budget, the absolute wrong move at this time.”

From the hip: This is what lame ducks are good at. Speaker Bonnen made a decision that would have inspired severe political retribution had he did it in a re-election cycle.

With Bonnen-Gate in mind, it is now common knowledge by now that Bonnen has his enemies. One of whom is Rep. Darby, a relatively moderate Republican who opposed Bonnen on his push for outlawing taxpayer-funded lobbying (kudos to him on that). This is according to our analysis of a secret recording that shook the Capitol community over last summer and led to Bonnen’s decision to not seek re-election for the 2021 session.

Arguably, the most powerful committee in the Legislature is Calendars, which determines what bills are scheduled for debate on the House floor. For Gonzalez to have been named vice chairman shows Bonnen’s prior confidence in her, although she was quick to call for Bonnen’s resignation after last summer’s scandal. So that she becomes a member of the LBB is no major surprise; but on the other hand this probably would not have happened if Bonnen wasn’t on his way out. We’ll leave the reason to him, though there seems to be no press release from his office on the matter.

We’ll wrap up our confusion with this interesting factoid: Gonzalez is on the more liberal side of the House Democratic caucus. We’re not talking a Centrist Democrat, here, but a dedicated fiscal and social liberal (did we mention she’s chairman of the LGBTQ Caucus?) from a solidly Democratic district. Wrap your mind around that.