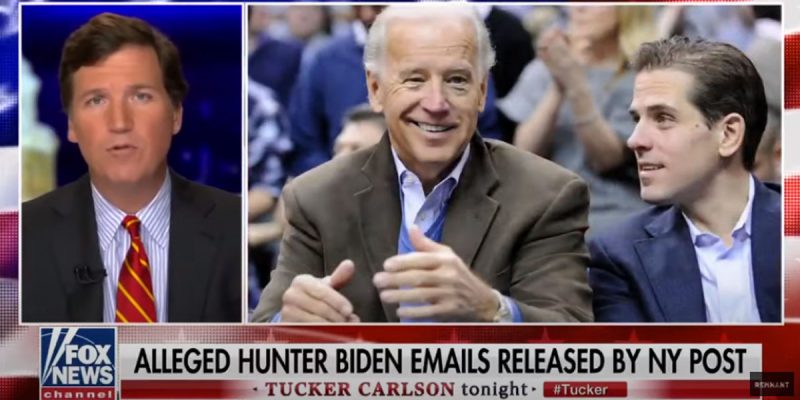 The New York Post gets credit for breaking the story, or at least the most recent disclosures within the story, of the trove of emails on a laptop computer former vice president and Democrat presidential nominee Joe Biden’s son Hunter deposited with a Delaware computer repair shop and then abandoned. Those emails contain a wealth of evidence that Hunter Biden was serving as a front for his father’s corrupt shakedowns of foreign countries using American foreign policy as a lever. When vice president Biden was put in charge of foreign policy toward a given country, the two most prominent examples being Ukraine and China, soon after Hunter found himself involved in stunningly lucrative deals with politically-connected entities in those countries.

Most obvious in that series of corrupt bargains was the mobbed-up Ukrainian natural gas company Burisma, on whose board Hunter, who had no expertise either with Ukraine or the natural gas industry and who at the time was in the throes of a serious drug addiction (an addiction we do not know is entirely in the past, by the way), was placed at a starting salary of $50,000 per month. The emails which made their way to the New York Post would prove the obvious – Hunter’s role on that board was to deliver the political favor of his father, at the time the U.S. point man on foreign policy toward Ukraine. And that favor ultimately involved a specific action, namely that when Viktor Shokin, at the time the equivalent of Ukraine’s attorney general, began an investigation into corruption involving Burisma, the company asked Joe Biden to step in to put a stop to it.

Which Biden did. And later bragged about it at a conference of the Council on Foreign Relations in a video everyone has now seen. Biden denies there was any wrongdoing associated with his strong-arming the Ukrainian president into firing Shokin, but that denial rings very hollow after the Post story.

So what to do? Well, Facebook and Twitter jumped in and did everything they could to bury the story and keep it from being distributed on social media – which aroused the interest of the Senate Judiciary Committee in a way which could have far-reaching implications for the Big Tech giants. The legacy news organs like the New York Times, Washington Post and broadcast and cable TV news networks, almost completely refused to cover it. And the Biden campaign used the outbreak of censorship as evidence that the story was “debunked,” in an exercise of perfect circular reasoning.

But the story hasn’t gone away. Not by a long shot. In fact, the censorship of the New York Post’s revelations has become an even larger story than the revelations themselves.

And Carlson hit the story even harder last night…

"That’s how things really work in Washington. Your son has a lucrative consulting deal with a Ukrainian energy company, you tailor American foreign policy to help make him rich." pic.twitter.com/EhHvi4GvXe

This isn’t going away. It can’t go away. There are too many emails and there is too much dirt on that hard drive, and it’s just going to continue pouring out in a drip-drip-drip all the way to the election.

And as the story grows, the attempts by the Democrats’ allies in corporate news and social media to suppress it will only worsen the problem.

Interested in more national news? We've got you covered! See More National News
Previous Article PERRICONE: A Tale Of Two Vintners
Next Article APPEL: What Role Will The Media Play In The Outcome Of This Election?