Bernie Pinsonat is probably right in his prediction of what legislators will do in the session which started yesterday. If he is, though, it’s a blown opportunity and an indication that there ought to be some forced turnover in 2023.

The veteran pollster and political consultant gave an interview over the weekend to the Louisiana Radio Network, and he said none of the hot-button political issues raised by various bills filed in advance of yesterday’s opening will amount to much. Instead, everybody’s just going to play Candy Man.

Political analyst Bernie Pinsonat expects the legislative session that begins Monday to be dominated by debate over how to allocate billions in federal pandemic aid.

There are a number of controversial culture war topics on the docket including trans issues, marijuana legalization, prison labor, and teaching about systemic racism, but ultimately Pinsonat does not expect they will make it into law.

“Those things tend to fade away and you may end up with some type of bill that is somewhat controversial then the Legislature waters it down, generally in the Senate, and nothing happens,” said Pinsonat.

Pinsonat said unlike in other states he does not expect there to be much appetite in Louisiana for controversial elections and voting bills.

The Legislature will be tasked with writing the regulatory framework for sports betting after a legalization ballot initiative passed overwhelmingly last year. Pinsonat expects it to get done.

“It is something that will likely pass because we have gaming that funds government and now we are going to have sports betting that is going to fund government, all of these things are pushed by more money for government,” said Pinsonat.

It’s hard to argue with his reasoning. Pinsonat has been around for a long time and he’s seen many a legislative session.

You might be tempted to think things have changed a bit in recent years, particularly with Louisiana having elected what is supposed to be the most conservative legislature ever in 2019 and even more so given the out-of-control cultural aggressions we’re seeing on the left these days and the fairly obvious need for state legislatures to rein those in.

The bills, for example, by Rep. Beryl Amedee and Sen. Beth Mizell seeking to protect girls’ sports in Louisiana from being overrun by “trans-women” as has begun to happen in a few other states and elsewhere in the world, aren’t radical. They’re the very definition of conservative. They seek to keep things as they’ve been for the whole time there have been girls’ sports. Of course, bring a bill like that and you’ll be called every name in the book by the radical Left, with the cooperation of the state’s legacy and corporate media, and before you know it you’re “fringe.”

That’s how it works, and nobody wants to be “fringe.”

So constitutional carry is going to be seen as “dangerous” in a state where the criminal class indiscriminately violates gun laws and those therefore provide very little protection to lawful citizens, and while Gov. John Bel Edwards hasn’t said whether he’ll veto Rep. Danny McCormick’s bill establishing constitutional carry in the state, it would be a surprise if he signs that bill should it pass.

And when Rep. Ray Garofalo, who chairs the House Education Committee, is serious about finally doing something about the destructive rot that is Critical Race Theory and the anti-American messages contained in it being used to poison kids in the schools, he’s going to be browbeaten for having stirred things up. Garofalo’s bill attempting to stop CRT indoctrination of Louisiana’s schoolkids is being reported as “making it potentially illegal to teach about racism & sexism.”

And when it’s cast in that light, Garofalo is going to have an uphill climb to get his colleagues on board with doing something about it.

So you’ll know, Critical Race Theory is absolute poison. It teaches white kids they’re born racists who have to bear the guilt for things they’ve never done. And it does way more damage than that to black kids.

The Manhattan Institute did a study on this, and the results of CRT being exposed to black kids are devastating. Reading a passage of Ta’Nehisi Coates’ screed to some subjects of the study as opposed to something else had an immediate effect on morale, for example… 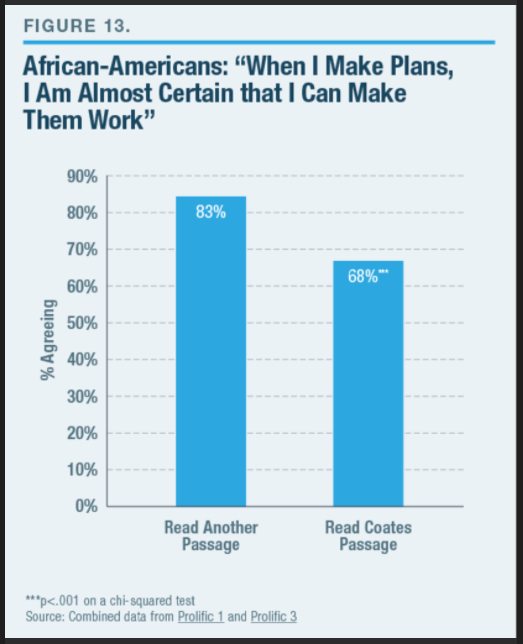 What do you think an entire educational curriculum is going to do to those kids? Do you think they’re going to be confident, capable and patriotic citizens, or will they be angry, hateful and despondent and ready to take to the streets in revolution?

Besides the fact that all of the precepts of Critical Race Theory are lies. It’s an outgrowth of cultural Marxism, which was a project exclusively of white guys from Europe who concocted it as a justification for a socialist revolution they couldn’t get citizens of Western democracies to accept based on economics.

A place like Louisiana, with its legislators who are supposed to be more conservative than ever, ought to be willing to fight these battles. Particularly given that Louisiana has been abandoned by corporate America for a long time now and there is no real threat that some “woke” corporation will be yanking its headquarters out of Louisiana if our legislators take up the cultural fight. We’re not Georgia.

But our legislators can’t touch these issues. They’re too hot. They’re “controversial,” and if you stand up for them you’ll get nasty troll comments under your social media posts, and Stephanie Grace will write you up as a bigot or a Neanderthal.

Not when there are billions of dollars in federal money dropping in from helicopters the legislators need to grab up and spend propping up a failed, bloated, inefficient state government dominated by leftist activists like Dylan Waguespack and Jan Moller.

The big fight will be “streamlined” sales tax collections, apparently. Which, while it would definitely be an improvement for the quality of life of small businesspeople around Louisiana and certainly ought to be done regardless of the whining from Louisiana’s tin-pot sheriffs, is hardly a big-ticket public policy change.

Not when Mississippi is canning their state income tax. Or when our neighbors are all back to normal and we’re still holding on to useless COVID restrictions. If our legislators are comfortable going through the motions as we fall further and further behind, or to throw their hands up and declare it’s impossible because Edwards will just veto everything, then they aren’t leaders and they don’t deserve to be re-elected.

Biden’s billions propping up Louisiana’s government might be the worst thing that could have happened to public policy in this state. That money appears to be lulling the legislature, or at least its leadership, into the sleepy idea that this state isn’t fundamentally broken in its economics and governance and that its culture is under attack from nefarious radicals, some of whom are taxpayer-funded at our own universities and public schools.

There is a lot of work to do. Important work. But we can’t argue with Pinsonat that very little of it will actually be done in this session.

We desperately hope we get surprised over the next two months. The hour is getting late for Louisiana and it’s time to fight for the kind of state we want to be.

Interested in more news from Louisiana? We've got you covered! See More Louisiana News
Previous Article MASSON: This Dude Accused Me Of SPYING While Fishing!
Next Article SCALISE: Democrats Created The Crisis At The Border