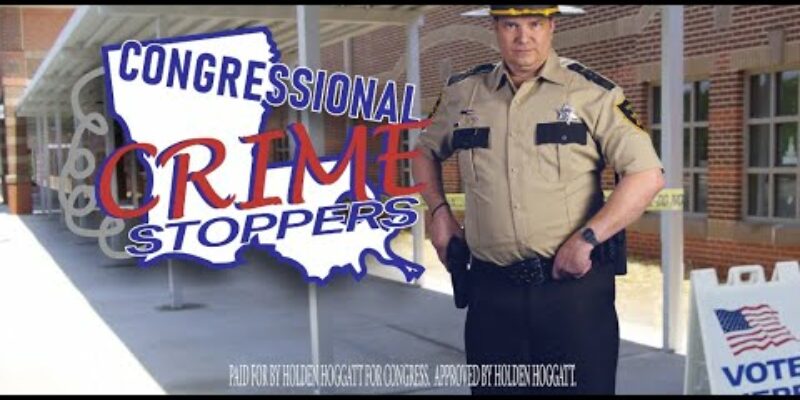 This won’t be a big post because there isn’t anything much to it, but seeing as none of the congressional races in Louisiana look to be remotely competitive we’ve been kinda struggling to gin up anything to write about where they’re concerned and at least there’s this. It’s an ad by Holden Hoggatt, a Republican from Lafayette who’s running against Clay Higgins in Louisiana’s 3rd District…

We’ll say this before we get going that Holden Hoggatt has virtually zero chance of beating Clay Higgins, who’s quite popular in that district and in fact might be the best representative of the point of view of a congressional district of anybody in the country.

And that’s true even though Higgins’ place in St. Landry Parish is just outside of the district. Doesn’t matter – they like him there and they should. And that doesn’t disqualify him from representing the 3rd District, no matter how often it gets brought up.

Except Hoggatt doesn’t like Higgins, and he’s shooting pretty wildly inside the GOP tent with this spot.

Well, the impression of Higgins, from his days as the Cajun John Wayne in the old crimestoppers videos which went viral and launched him into a political career, is decent, so there’s that. It makes the concept a pretty good one.

The problem comes in the execution.

If you’re going to go the route of hitting Higgins based on an impression, you’ve decided you’re going to make a funny ad. So that means you’re going to satirize him and pick out gaffes and embarrassing things you can pop him with, and maybe that’s a string of ads you’re going to rotate in which make fun of a different thing each time. And there are maybe a few items – Higgins getting screamed at by AOC for arguing with that insane woman who wants to shut down Louisiana’s petrochemical industry is one, though most people backed him in that case, or maybe when he got in a little trouble because he went to Auschwitz and cut a video talking about the danger a totalitarian government can pose and in some quarters they found that disrespectful. And there was his tough talk about a Black Lives Matter-style group which threatened to demonstrate around Lafayette brandishing guns in an effort to intimidate police who killed a street criminal on a rampage.

None of that stuff really put Higgins in the wrong, but maybe it was bumpy. Your play would be to say you’d rather have somebody who doesn’t do bumpy.

If you had somebody talented enough to write those ads, perhaps you could paint Higgins as a bumpkin. Then, of course, you’ve got to show your candidate as more sophisticated. We honestly don’t know enough about Hoggatt to judge whether that’s doable.

But in southwest Louisiana, sophisticated and urbane doesn’t really impress people. That’s Cajun country, and the folks are salt-of-the-earth types like Higgins. Attacking him as country-come-to-town probably has the reverse effect, and attacking him because he speaks his mind and because the make-believe sophisticates at the Baton Rouge Advocate trash him in the editorial section is of questionable value. You’d have to do a very artful job of that if you want to attract more votes than you repel.

But what they chose to do is make it a mean attack ad, and we think that’s a mistake. Doing an impression of Higgins to call him nasty names doesn’t erode confidence in him; it just makes voters defensive. And especially saying that he’s “impersonating a congressman” doesn’t look like a good idea; the voters in that district have elected him three times already, so if he’s impersonating a congressman it means they’re morons who’ve been fooled thrice.

Who wants to hear that?

And the ex-wife stuff is a loser. The voters have heard all of that before when Scott Angelle tried to use it, and the voters just got turned off by it because let’s face it, everybody who gets divorced has horror stories told about them and most people in a divorce don’t act their best. “None of my business” is how most people react when they hear divorce dirt.

It could have been a good ad, and it might have given voters some warm fuzzies about Hoggatt that maybe he could bank for a future electoral run, like for the state senate or the Public Service Commission or something down the road. But the execution of it just leaves us thinking “amateur hour.”

That guy doing the Higgins impression, though? He might have a future.