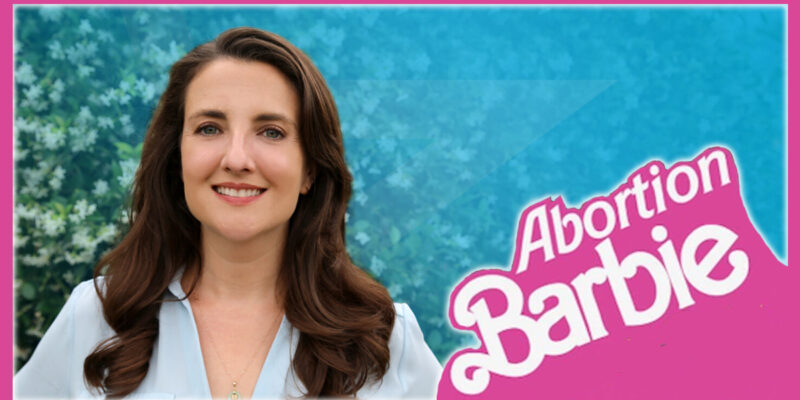 We noticed something that popped up a couple of times this week and found it interesting, not so much because of what it is but what it reveals. And frankly, it’s as frightening as it is illuminating. Modern Democrats have spent the past 20 years becoming increasingly more combative and dogmatic about their radical politics, to such a point that they’ve literally dehumanized people who disagree with them.

And now they’re just open about it.

So when John Kennedy released a TV ad about crime, and closed it with the statement to the woke anti-cop crowd, “the next time you get in trouble, call a crackhead,” that was “controversial” and it led to the likely second-place finisher in Kennedy’s race for re-election popping off on Twitter and yelling, “You[‘re] a piece of trash!” at Kennedy.

I saw @SenJohnKennedy dropped a crime ad. He spends more time dropping one liners than actually doing his job. He’s a walking dog whistle, and I won’t let it slide.

Help me send him home. We can take out the 🗑️ Nov. 8th. Share and Donate for #MoreOfUs pic.twitter.com/OBFfun4LvM

Yes, you say, but that’s Gary Chambers, and all he brings to the table is invective and insults and yelling and screaming. He isn’t a real reflection of the Louisiana Democrat Party.

Well, perhaps. Except those kinds of sentiments are everywhere.

You don’t know who this guy is, but he’s the editor of New Orleans Gambit…

It is wild that so many people vote for Clay Higgins knowing full well he hates them and would rather they die than do anything at all to help them. I just … don't understand it

The vitriol, disrespect and ugly tone is shot through everywhere among these people.

Then there’s Mandie Landry, the far-left state representative from Uptown New Orleans who has made herself a figure of fun around the state since getting elected by engaging in weird antics like Branch Covidian Karen-style shaming of her fellow legislators for not wearing masks during the 2020 regular session. When that earned her notice from the highly-trafficked message board TigerDroppings, and a great deal of ridicule from the participants therein, here was her response… 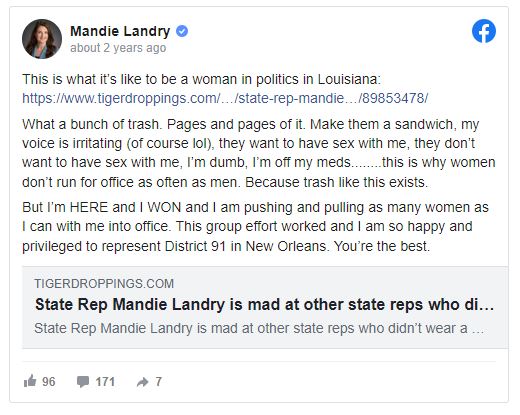 Then there was Landry bringing bills to legalize prostitution, which put her pretty far out on the fringes and lending a certain tenor to her record.

But earlier this week when we noted the wholesale pandering to the abortion industry going on among Democrats in Louisiana, including in the state senate race between Landry and her fellow state representative Royce Duplessis, we judged that Landry was the runaway winner of the pro-abortionist competition for her nonstop references to “coat hangers” and wild-eyed predictions that “women will die” as a result of an abortion ban.

We called her Abortion Barbie, which we stand by. If Landry looked like most of the hard-core pro-abortion fanatics engaged in Louisiana politics nobody would pay attention to her and she knows it. Her political presentation, including in her race against Duplessis to succeed the disgraced Karen Carter Peterson, reflects that.

And while a radical pro-abortion stance is hardly the extent of her oddity, it’s certainly the item that gets her up in the morning.

So the sobriquet is appropriate, regardless of whether it hurts her feelings.

But here was the response to it, in a fundraising email…

It’s more critical now than ever that women and anyone who is pregnant receive the care that they need, when they need it. And that means having people in elected office who understand this and work for these improvements. I have a lot of experience, and success, in working on women’s health issues – read more here

My constant advocacy for women’s health has earned me my newest nickname from the state’s foremost right wing trash blog: Abortion Barbie. It might be my favorite nickname yet. If you’re on Twitter, go vote in my poll. (“Louisiana AOC” is my secret favorite.)

We aren’t bothered that Mandie Landry thinks we’re trash. Nowhere near as much as it bothers us that she thinks people she doesn’t know can be trash for disagreeing with her or disapproving of her.

But what’s most bothersome about Mandie Landry is that it’s a lot worse than that. Because who she also thinks is trash are the 63 million Americans who never got to have a life because somebody killed them before they were even born following the Roe v. Wade decision.

She spends lots of time blubbering about women she says will die because the law won’t let them have an abortion, and while it’s conceivable there might be a few cases here and there which we would hope can be avoidable, she couldn’t give a red-hot damn about those 63 million people who were actively slaughtered per her stated preferences. Because killing a human being you regard as trash is what an abortion is all about.

And 63 million deaths is a genocide.

So yeah – call us trash. Genocidal maniacs generally think that way about their fellow human beings. We just want Mandie Landry and the rest of these radicals to own what they are, so that the rest of us can see things quite clearly.

And then cherish and hold dear our Second Amendment rights, because the way things work when this crowd is in power, they’re more important than ever.