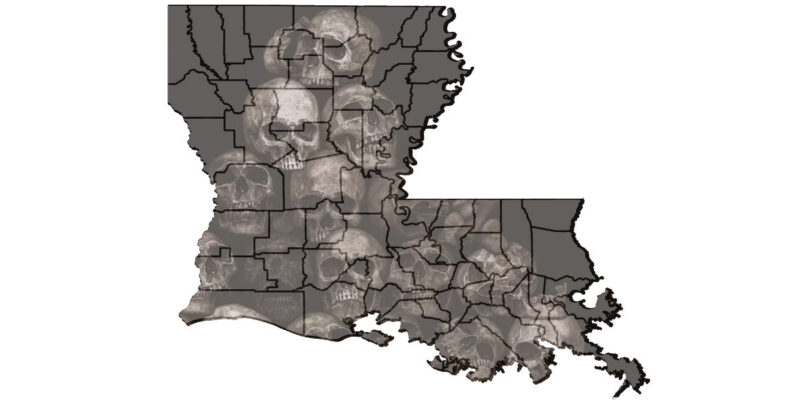 Some of the criteria they’re using to reach this conclusion are dumb, but the most obvious ones tell the truth – that we’re more or less a statewide shooting gallery and we’re in worse shape from a public safety standpoint than anybody else. Louisiana has a leadership vacuum which is costing lives and making it unlivable.

A new survey titled 2022’s Safest States in America has listed Louisiana as the most dangerous to live in out of the 50 states when weighing numerous factors.

The survey was conducted by WalletHub and compared the 50 states across 53 key measures in the 2022 calendar year. These factors included statistics like assaults per capita, unemployment rates, percentage of residents fully vaccinated, and more.

Louisiana, for many statistics, was either at or near the bottom. For murders and non-negligent manslaughters per capita, the state ranked last. It was also 46th in fatalities per 100 million vehicle miles of travel and assaults per capita.

While Louisiana remained among the most dangerous states for several categories, it also ranked fifth for police officers per capita.

For loss amounts from climate disasters per capita, it was tied last and came in at 47th for the percentage of residents fully vaccinated against COVID-19, which is currently among the top five causes of death in the U.S.

But Louisiana isn’t only at the bottom when it comes to crimes. It also sits near the bottom in emergency preparedness, 49th, and financial safety, 48th.

The study found that the safest state to live in is Vermont, followed by Maine, New Hampshire, and Utah. In descending order for the least safe were Alabama, Texas, Arkansas, Mississippi, and finally, Louisiana.

Chiefly this is driven by the fact that New Orleans, Baton Rouge and Shreveport are utterly lawless hellholes run by Democrat politicians who pander relentlessly to criminals and who have eviscerated the justice system to the point where it’s simply a revolving door for the scum of the earth to cycle through on their way to victimizing the law-abiding (and other criminals) without end.

But the rot isn’t restricted to that.

Take, for example, the fact that suburban Ascension Parish is turning violent as well…

GONZALES – A man allegedly carjacked someone at an Ascension shopping center before crashing the stolen car into a house Wednesday afternoon.

The armed suspect, 18-year-old Ricky Williams Jr., allegedly stole the vehicle in the parking lot of the Bayou Terrace Shopping Center around 2 p.m.

From there, Williams led law enforcement on a chase into Gonzales, police said. The car eventually crashed into a house at the corner of Orice Roth Road and Darla Street. Williams allegedly tried to run away from the crash scene was but was taken into custody.

Police said Gonzales Middle School, which is located nearby, briefly went on lockdown out of caution.

PRAIRIEVILLE – Officials are investigating a shooting in Ascension Parish that left an 18-year-old dead and another injured Tuesday morning.

The Ascension Parish Sheriff’s Office said deputies were investigating the shooting, which happened shortly before 8 a.m. off John Broussard Road, a residential street off LA 42.

DONALDSONVILLE – A man arrested for shooting multiple occupied apartments was arrested for 19 counts of aggravated assault.

Monday, the Ascension Parish Sheriff’s Office announced the arrest of 23-year-old James Peters for his connection to a shooting in Donaldsonville that happened Oct. 19. According to deputies, around 5:45 p.m., Peters shot at multiple occupied apartments on the 200 block of D’Ville Village Circle.

Though the apartments were occupied, no injuries were reported.

PRAIRIEVILLE – Deputies arrested a man for allegedly beating another man and leaving him in the road after a minor car accident Sunday.

According to the Ascension Parish Sheriff’s Office, the accident happened around 8 p.m. along Causey Road.

Deputies said the victim was attacked after the accident while trying to talk to Bryan Cage, 37. The victim was taken to a hospital with multiple injuries but has since been released.

You move to Ascension from Baton Rouge to get away from the rampant mayhem that has taken over the capital city, and you get all of this in the space of about 10 days.

So who’s going to step in and do something about it?

Certainly not John Bel Edwards. He’s too busy sticking his fingers into the Green New Deal pie so that he can cover himself in filthy lucre when his regrettable tenure as governor is done. He won’t do anything, and the crime in Louisiana will only get worse until he’s gone. Hell, Edwards is such a disaster from a law and order standpoint that he’s allowed the State Police to fall 300 officers short of its allotted full strength, something Louisiana’s lapdog legacy media has very little interest in reporting.

Local governments? Maybe in the suburbs you’ll see cops getting more aggressive to take criminals off the streets. The problem is, in the cities they’ve already decided that pandering to the crooks gets more votes. And the cities are now exporting their crime to the suburbs. Most of the above in Ascension isn’t home-grown; it’s an invasion from across the parish line.

Jefferson and St. Bernard Parishes know all about that.

And ultimately you’re going to see vigilantism, which sounds like an attractive solution until you realize that vigilantism is a stage of lawlessness even beyond rampant crime. Vigilantism almost always means mistakes get made and innocent people get hurt.

It’s a vacuum of law and order, and it comes from a vacuum of leadership. That has to be filled at the state level in next year’s elections.