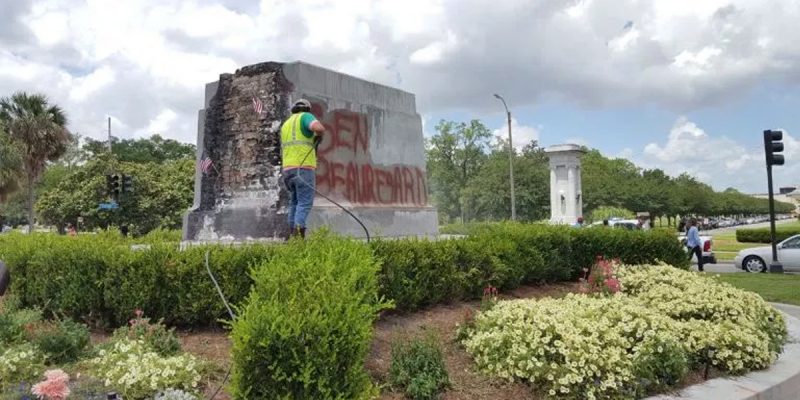 New Orleans Police Department (NOPD) put handcuffs on a monument vandal for the first time in two years and, go figure, he is a monument supporter.

Since Mitch opened his dumb mouth in June 2015, the Take Em Down NOLA members as well as Anti-Fascists and other nuisances have been spray painting historic markers around New Orleans.  During Jazz Fest, the Joan of Arc monument was spray painted “Tear it down,” the only guess is that it offends the extreme left that she is a Christian.

Today’s pioneer in the monument crusade spray painted “Gen. Beauregard CSA” in red letters on the side of the Beauregard Monument plinth.  Handcuffed and taken away, these are the priorities of NOPD as the city literally shoots itself to the top of crime statistics like the five shot and two dead while Mitch’s Gestapo was preoccupied with a bronze statue. Not to mention the boat fire at West End, not far from City Park which burned out of control while members of the New Orleans Fire Department were busy incompetently attempting to take the Beauregard statue down.

Ironically, Beauregard was the first monument to get vandalized on June 28, 2015.  The culprit wrote on the two long sides of the pedestal the same message. The first time attempt spelled “Black Lives Madder.” The vandal attempted to correct it and spelled “Black Lives Matter” on the opposite side. The news outlets all showed the correctly spelled version.

The messages were not profound, they were more drivel like ignorance such as: “TAKE DOWN WHITE POWER,” “JUSTICE 4 ALTON STERLING,”  “Fist Up. Shoot Back. #F*ck12,” “Soros,” “WE READ WE COMIN TAKE EM DOWN,” “TAKE EM DOWN …OR WE WILL,” “TAKE IT DOWN NOW,” “WE WILL REVOLT,” “DISMANTLE WHITE SUPREMACY,” “SLAVE OWNER.”  Sometimes they threw red blood to look like paint, sometimes they got creative with signs like with E.D. White and recently Beauregard.  And then the most extravagant was the riot at Lee Circle following Donald Trump’s victorious election by the people of the United States to be President.  TheAntifas gathered at the base of Lee Circle and spray painted all over the pyramid base things like: “Fuck White People,” “Die Whites Die,” “Fuck Trump,” “We are ungovernable,” “BLACK POWER,” “FUCK PENCE,” “WE ARE COMING WATCH OUT.”

Probably about three dozen separate acts of vandalism committed to historic monuments that were largely in the spot light.  No arrests. Malcolm Suber and Quess Moore of Take Em Down are perfectly visible in videos that were provided to NOPD. Nothing.

Malcom Suber actually told the Times Picayune that Take Em Down “had no role in the taggings though the group applauds those who did. As long as they stay up, this (vandalism) will continue to happen.”

The moron spokesman for Landrieu actually said in 2016, “vandalism of any public property is strictly prohibited.”

A group of what was likely the same Antifas vandalized the newly reopened St. Roch Market on May 1, 2015.  Mitch Landrieu spoke out immediately condemning graffiti on other city property saying, “It’s a damn shame.”