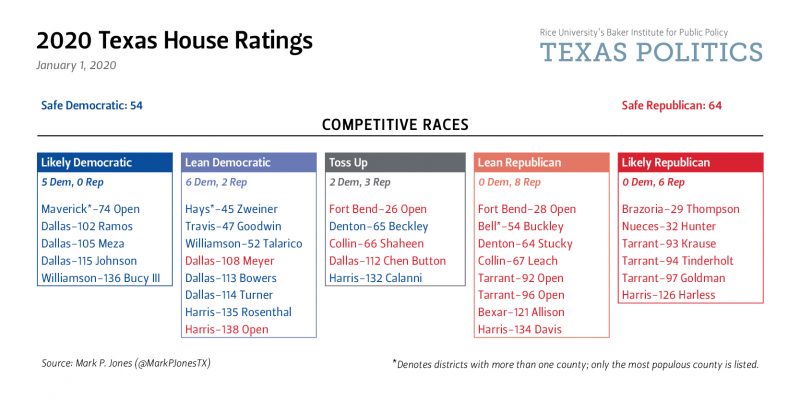 Currently there are 83 Republicans and 67 Democrats in the Texas House of Representatives. According to one of the more respectable political scientists in Texas, the number of “Safe Republican” districts in the 2020 election still outnumber “Safe Democratic” seats — by 10, and enough for the GOP to hold on to a majority in 2021.

Mark P. Jones of Rice University released his 2020 Texas House Ratings on New Year’s Day, analyzing each of the 32 Texas House races up for grabs in the 2020 election year. Below are his ratings:

From the hip: We would add at least two more Toss Ups to the ratings.

Republicans will likely perform better than expected. President Donald Trump will do better in 2020 than in 2016. This will provide some coat-tails to consider for down-ballot candidates. 2016 and 2018 were “peak Democrat” years, made evident by “push back” efforts in the suburbs, particularly in the areas north and west of Austin where Republican turf was taken back from Trump-bashing liberal ground troops.

With that said, and being situated in the Austin metro, we disagree that HD 136 is safe for Democrats. It was a fight for them to win it with an incumbent who presumed he was safe. It will take another fight with only freshman name ID for Democrats to retain it. Call this one a Toss Up.

We would also place HD 47 in Austin into the Toss Up category — with five candidates in a pact not to fight one another through the Primary but to take shots at freshman incumbent Goodwin. Republicans are hungry to win back a long-held Republican seat by Rep. Paul Workman — their only state House seat in Austin.

Suburban Fort Worth and Tarrant County is rightfully predicted to stay in the deep red territory, as are urban Dallas and urban Houston seats likely to stay Democrat. The battle will be in the “urban suburbs,” where Democrats are banking on rapidly changing demographics to hand them automatic victories.