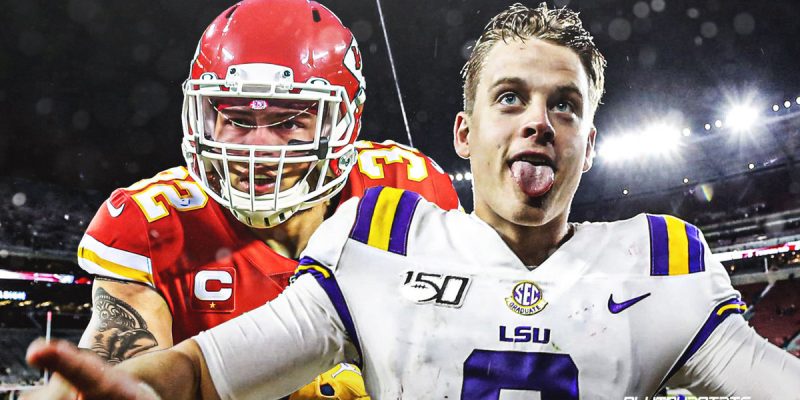 The two LSU legends landed on the Mount Rushmore of Tiger greats back in December. The elder statesman, earlier in the month, narrated an epic video promoting the younger’s 2019 Heisman pursuit.

The sensational defensive back and punt returner for the Tigers from 2010-11, Mathieu, fresh off a Super Bowl victory with the Kansas City Chiefs, has always respected his fellow alum. On a recent episode of ESPN’s First Take, he praised Burrow for his talent and the way he carries himself.

“I think he is going to bring some juice,” said the seven-year veteran Mathieu about Burrow entering the NFL. “I think he brings a lot of swagger. I think if anybody follows LSU football and they see his maturity and growth, they see a quarterback who really matured into one that has attitude, that has personality, that has swagger. I think he understands what he wants to have done during a football game. He is so mature and so humble. I think he’s more so excited to prove people wrong than prove something to himself.”

It is doubtful at this point that anyone is questioning Burrow’s worth or what great things he will likely do as a professional. But if Mathieu is right and Burrow still needs that chip on his shoulder as he had at LSU, every NFL team not named the Bengals (or the Dolphins) had better look out.

Whichever team Burrow lands with will likely be getting a perennial All-Pro. Not to mention a spark for the franchise in desperate need of one. This will make Burrow’s work tough trying to pivot one of these lowly franchises in the right direction while smack dab in the middle of an organizational rebuild.

Mathieu thinks Burrow is precisely the man to do it.

In leading LSU to a 15-0 record and the national championship, Burrow completed 402 of 527 passes (76.3 percent) for 5,671 yards and an FBS single-season record 60 touchdowns to just six interceptions–throwing none of them in the final five games of the season. The former recruit out of The Plains, Ohio added 368 yards on 115 rushes and five touchdowns.

These numbers tell much of the story. He rewrote the LSU record books and set a lofty bar for future SEC quarterbacks to aspire to. That, along with his winning attitude and confidence–an unparalleled swagger–is why NFL veterans like Mathieu are predicting big things in his future.