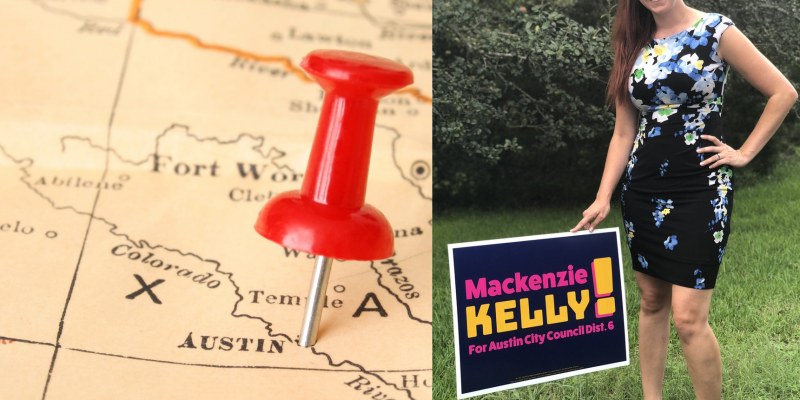 Though far from a total game-changer, a win on the Austin City Council sent a major shockwave in what is arguably Texas’s most liberal city.

A fellow conservative, Jennifer Virden in neighboring District 10, lost by around the same percentage to a Democratic incumbent after a resource-draining general election.

Incumbent Council member, Jimmy Flannigan, upped his ground game when it became clear that 62% of the electorate vote for anyone but him in the general election. Flannigan, a member of the city’s public safety commission, voted along with the rest of the Council to cut police funding — and this during a relaxation of homeless camping policies and an increase in violent crime in the city. He joined the Council in their complete ambivalence to Mayor Steve Adler‘s lockdown vacation to Cabo, solidifying a reputation as not being very representationally minded.

Below is Kelly’s runoff victory statement:

From standing courageously behind our law enforcement community to demanding safer conditions for our homeless population to fighting for transparency at City Hall, the voice of Northwest Austin is has been heard.

Considering the stark differences between my campaign’s priorities and the platform of the incumbent, their united voice is resoundingly clear this evening!

I am honored to be the next representative for District 6 on the Austin City Council and will work immediately to begin healing the divisions in our community.

Congratulations to Council member Jimmy Flannigan on a hard-fought campaign. I, along with my staff, will look forward to working with Austinites from all backgrounds and political persuasions to build a better future for the greatest city in Texas.

From the hip: While just one victory doesn’t bode well for conservatism as a whole in the capital city of typically red Texas, there are a few factors to consider as part of this return to rightward representation:

1) The year 2020 was an awful year overall, a horrible year for conservatives nationwide, a draw statewide, and in Austin almost a wash aside from successfully defending Congressional Republican incumbents and winning a few local seats. One win in the Austin city limits is a significant beacon of hope for Republican voters everywhere, especially in a liberal city and in the 11th-largest municipality in the U.S.

2) DC politics did not matter as much as local concerns in the Runoff. Flannigan and company engaged in several familiar smear tactics (repeated by local media and various opposition groups) but they did not work in the face of a positive campaign focused on issues. Flannigan had hoped pinning Kelly as a Trump acolyte and, absurdly, a “white nationalist” would translate to moderate voters abandoning her. Instead, voters seemed more interested in local matters, especially after (during?) an exhausting presidential election cycle.

3) Conservatives do live in Austin and Travis County and are represented. And their votes were counted. Republican candidates perform about as well county-wide as do Democrats on the state-level. Which means that like Democrats, Austin conservatives will have to for now be content with solidifying pockets of support. For now, the strongest area of support seems to be the Riverplace neighborhood, located on the west side of town and the southern portion of Kelly’s district, it went 77% for Kelly. Dr. Jennifer Mushtaler, a former competitor in the general election, is HOA president in Riverplace, and endorsed Kelly late in the runoff cycle. All this to say that Austin isn’t like a CHAZ zone all over, especially in places where there are property owners with large houses or wider lots.

4) The spirit of 10-1 lives on. To explain: in the early part of the decade there was a major, multi-partisan effort to change the Council from all at-large to geographic districts. In 2014, 10 districts were created and one mayor (10-1). Two of the districts could be won by a conservative (6 and 8) and one was a toss-up (10). With Donald Trump as the Republican nominee and later President, liberals were hopping mad and swept candidates into office in record numbers — first flipping District 6 and 10 in 2016 and later District 8 in 2018. Now it has been proven that a well-run campaign can win back District 6 and possibly even 8 (which is up in 2022). District 10 may be winnable under more favorable conditions (e.g. an unpopular Joe Biden Administration?).

5) Kelly was Teflon against the usual Democratic attack lines. Kelly, though a conservative and a Christian, is not your usual right wing candidate — with the eclectic background you could expect from a native of the Live Music Capital of the World. She’s a young (34), independent-minded candidate — and raised far-less than Flannigan. Therefore the usual, rich-old-white-male-Religious-Right-sexist-homophobe-racist charges from the Left either did not apply or did not stick. Team Mackenzie navigated the racist attacks masterfully. Some would say she is a picture of the future, but The Hayride does not engage in identity politics.

The groups most excited about the District 6 victory so far have been the Austin Police Association and the Travis County Republican Party. Below are their statements, which say it all on how Kelly’s district became — in reversal of “the blueberry in the tomato soup” cliché — the bright-red cherry in Austin’s blueberry cobbler:

“Sanity is making a comeback in Austin. Having even just one pro-police, pro-transparency, pro-taxpayer candidate on the Austin City Council will make a tremendous difference in our efforts to stop the insanity of 2020 and restore full funding for public safety.

“Mackenzie Kelly and her team worked with an impressive team of volunteers eager to make sure the voices of Northwest Austin and District 6 were heard loudly Tuesday night. We are thrilled about her four-point victory over the radical Democrat incumbent and are grateful to all who contributed to her win.

“We also congratulate Jennifer Virden in District 10 on a hard-fought race. She nearly won, ultimately losing by a 51%-49% margin of fewer than 600 votes. Alison Alter voted for defunding the police and refuses to reinstate the camping ban. We hope this close race was a wake-up call for her. District 10 was drawn as a swing district in the original Austin 10-1 plan, which was originally won by a Republican. Virden’s momentum will translate to future victories in this critical district.

“We look forward to further victories in 2022.” 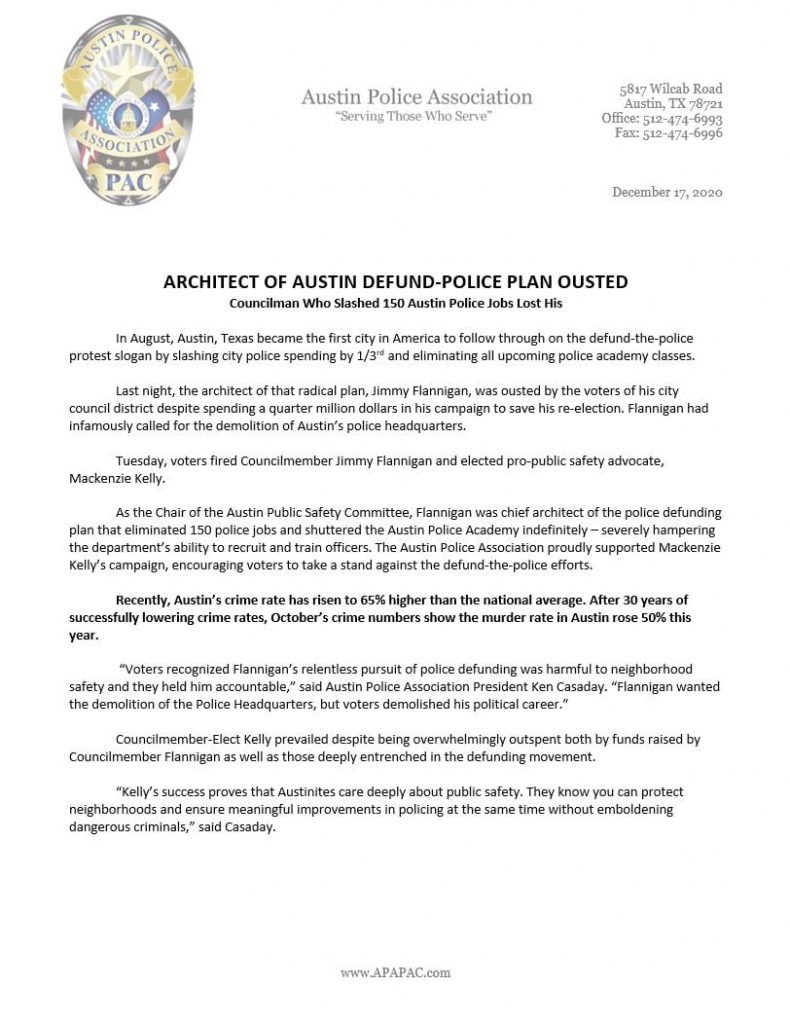 ______________
Disclosure: The writer handled communications for the Travis GOP and served as Kelly’s campaign advisor.